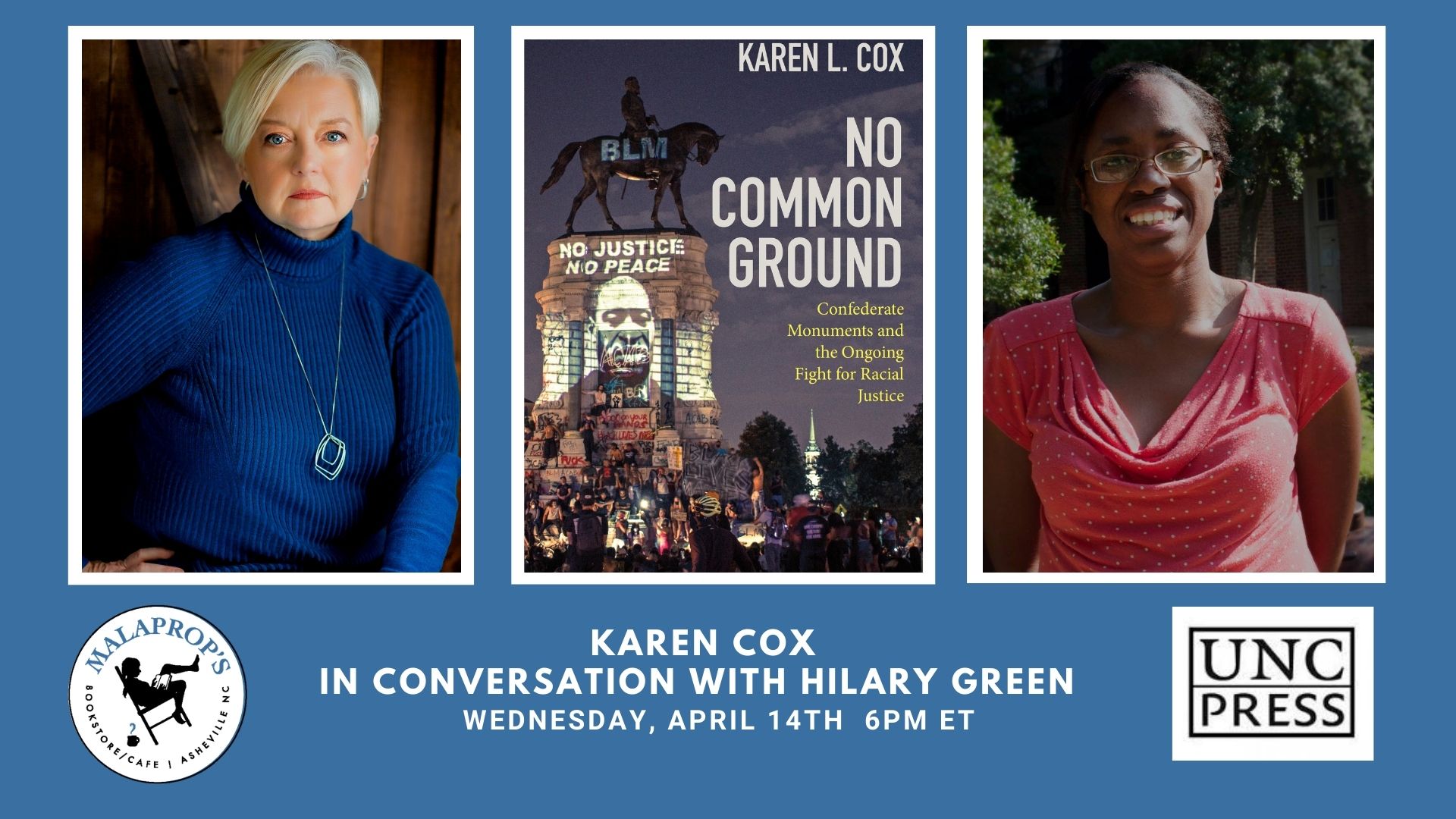 Like most of our events, this event is free, but registration is required. Click here to RSVP for this event. Prior to the event the link required to attend will be emailed to registrants.

If you decide to attend and to purchase the authors' books, we ask that you purchase from Malaprop's. When you do this you make it possible for us to continue hosting author events and you keep more dollars in our community. You may also support our work by purchasing a gift card or making a donation of any amount below. Thank you!

When it comes to Confederate monuments, there is no common ground. Polarizing debates over their meaning have intensified into legislative maneuvering to preserve the statues, legal battles to remove them, and rowdy crowds taking matters into their own hands. These conflicts have raged for well over a century—but they’ve never been as intense as they are today. In this eye-opening narrative of the efforts to raise, preserve, protest, and remove Confederate monuments, Karen L. Cox depicts what these statues meant to those who erected them and how a movement arose to force a reckoning. She lucidly shows the forces that drove white southerners to construct beacons of white supremacy, as well as the ways that antimonument sentiment, largely stifled during the Jim Crow era, returned with the civil rights movement and gathered momentum in the decades after the Voting Rights Act of 1965. Monument defenders responded with gerrymandering and “heritage” laws intended to block efforts to remove these statues, but hard as they worked to preserve the Lost Cause vision of southern
history, civil rights activists, Black elected officials, and movements of ordinary people fought harder to take the story back. Timely, accessible, and essential, No Common Ground is the story of the seemingly invincible stone sentinels that are just beginning to fall from their pedestals.

Karen L. Cox is an award-winning historian, Distinguished Lecturer for the
Organization of American Historians, and professor of history at the University of North Carolina at Charlotte. A successful public intellectual, she has written op-eds for the New York Times, the Washington Post, CNN, TIME, and more. Dr. Cox regularly gives media interviews on the subject of southern history and culture and is the author of four books, including No Common Ground: Confederate Monuments and the Ongoing Fight for Racial Justice (April 2020), Dreaming of
Dixie: How the South Was Created in American Popular Culture, and Goat Castle: A True Story of Murder, Race, and the Gothic South.

Dr. Hilary N. Green is an Associate Professor in the Department of Gender and Race Studies at The University of Alabama. For the 2020-2021 academic year, she is Vann Professor of Ethics in Society at Davidson College. She is the author of Educational Reconstruction: African American Schools in the Urban South, 1865-1890 (Fordham University Press, 2016) as well as articles, book chapters and other scholarly publications. In addition to several short publications, she is currently at work on a second book manuscript examining how everyday African Americans remembered and commemorated the Civil War.

No Common Ground: Confederate Monuments and the Ongoing Fight for Racial Justice (Hardcover)