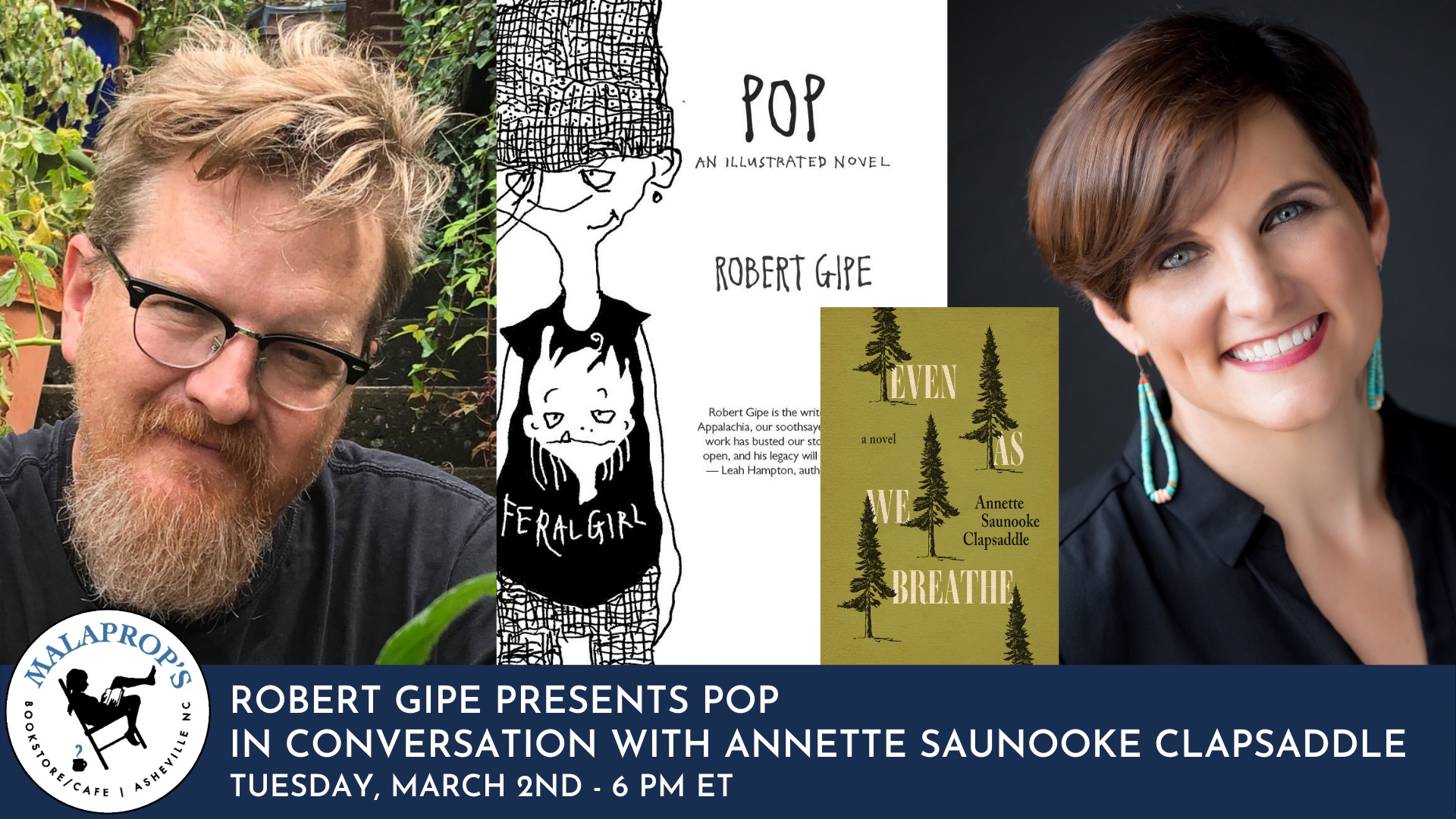 Like most of our events, this event is free, but registration is required. Click here to RSVP for this event. Prior to the event the link required to attend will be emailed to registrants.

If you decide to attend and to purchase the authors' books, we ask that you purchase from Malaprop's. When you do this you make it possible for us to continue hosting author events and you keep more dollars in our community. You may also support our work by purchasing a gift card or making a donation of any amount below. Thank you!

A coming-of-age story of hope, betrayal, and familial legacy set in rural Appalachia.

Set in the run-up and aftermath of the 2016 election, Pop brings the Canard County trilogy to a close as Dawn, the young narrator of Gipe's first novel, Trampoline, is now the mother of the seventeen-year-old Nicolette. Whereas Dawn has become increasingly agoraphobic as the internet persuades her the world is descending into chaos, Nicolette narrates an Appalachia where young people start businesses rooted in local food culture and work to build community. But Nicolette's precocious rise in the regional culinary scene is interrupted when her policeman cousin violently assaults her, setting in motion a chain of events that threaten to destroy the family--and Canard County in the process.

In the tradition of Gipe's first two novels, Pop's Appalachia is full of clear-eyed, caring, creative, and complicated people struggling to hang on to what is best about their world and reject what is not. Their adventures reflect an Appalachia that is overrun by outside commentators looking for stories to tell about the region--sometimes positive, sometimes negative, but almost always oversimplified.

Robert Gipe lives and works in Harlan County, Kentucky. Pop is his third Ohio University Press novel. His first, Trampoline, won the 2016 Weatherford Award for Appalachian novel of the year. His second novel, Weedeater, was a Weatherford finalist. For the past thirty years he has worked in arts-based organizing and is the founding co-producer of the Higher Ground community performance series. He has contributed to numerous journals and anthologies, is a playwright, and is currently a script consultant on a forthcoming television show based on Beth Macy's Dopesick. Author photo by Amelia Kirby.

Annette Saunooke Clapsaddle, an enrolled member of the Eastern Band of Cherokee Indians (EBCI) resides in Qualla, NC. She holds degrees from Yale University and the College of William and Mary. Her debut novel, Even As We Breathe (The University Press of Kentucky) is scheduled to release the fall of 2020. Her first novel manuscript, Going to Water is the winner of The Morning Star Award for Creative Writing from the Native American Literature Symposium (2012), a finalist for the PEN/Bellwether Prize for Socially Engaged Fiction (2014). After serving as Executive Director of the Cherokee Preservation Foundation, Annette (National Board Certified since 2012) returned to teaching English and Cherokee Studies at Swain County High School. She is the former co-editor of the Journal of Cherokee Studies and serves on the Board of Trustees for the North Carolina Writers Network.

Even as We Breathe (Hardcover)