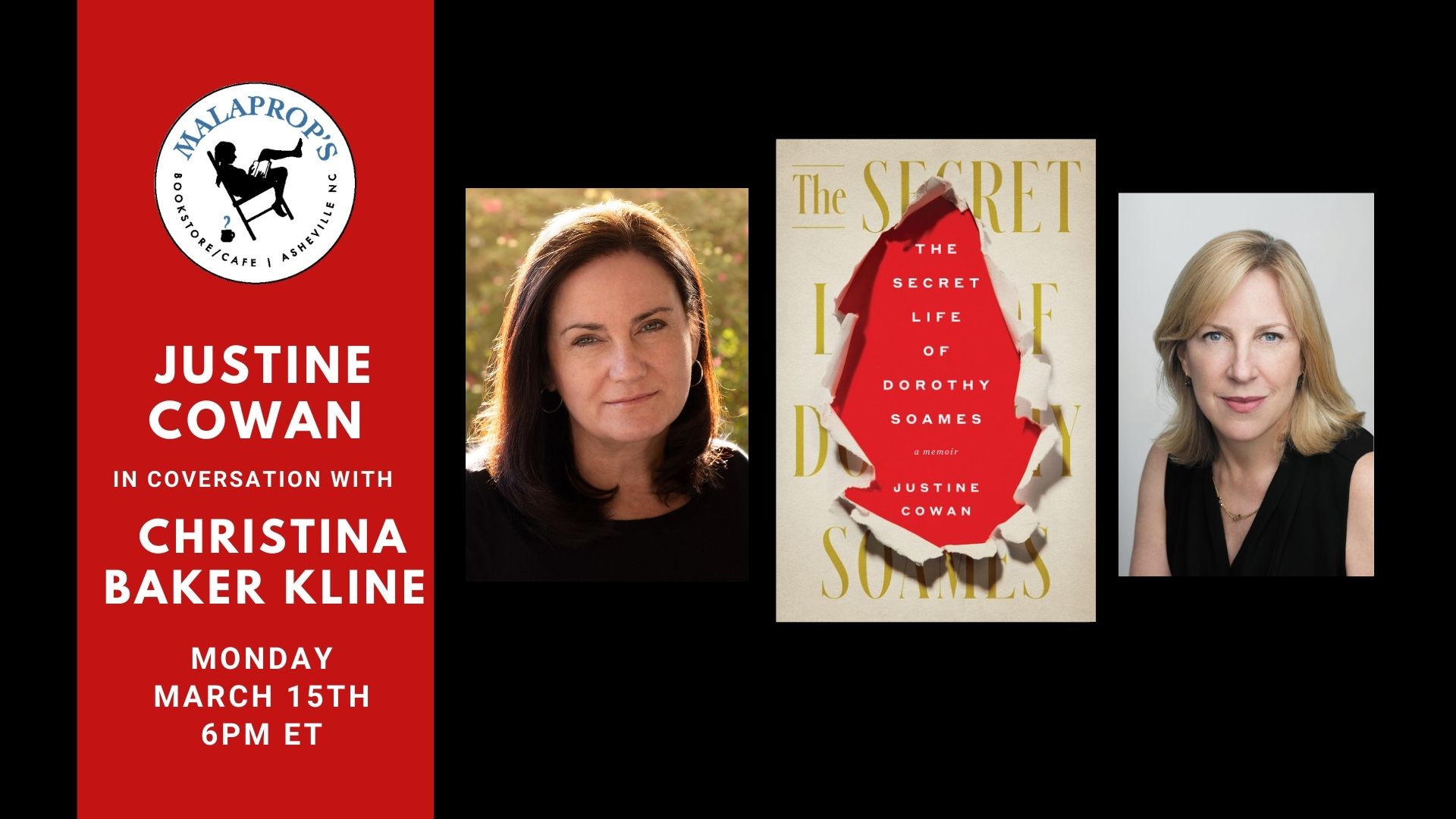 Click here to RSVP for this event. On the day of the event, we will send a reminder email with the link required to attend.

Like most of our events, this event is free. If you decide to attend and to purchase the authors' books, we ask that you purchase from Malaprop's. When you do this you make it possible for us to continue hosting author events and you keep more dollars in our community. You may also support our work by purchasing a gift card or making a donation of any amount below. Thank you!

About The Secret Life of Dorothy Soames

“Far from growing up in the wealthy, fox-hunting circles she had always suggested, her mother had in fact been raised in a foundling hospital for the children of unwed women.”
- Editor’s Choice, The New York Times Book Review

“Justine Cowan's extraordinary memoir The Secret Life of Dorothy Soames tells the story of her mother's harrowing childhood.  . . . [A] fascinating, moving book; part history of the Foundling Hospital and the development of child psychology, part Cowan’s own story, and part that of Dorothy Soames (the name Cowan’s mother was given at the hospital).”
– The Telegraph

A riveting family drama evocative of Angela’s Ashes and The Glass Castle, about a woman who discovers the shocking secret at the center of her mother’s life, The Secret Life of Dorothy Soames has been recommended by The New York Times, The Saturday Evening Post, Amazon Book Review, Kirkus, Publisher’s Weekly, and many more. In the U.K., it has been featured in The Mail on Sunday, The Daily Mirror and The Spectator, and called “extraordinary” by The Telegraph.

Overcome with grief after her mother’s death, Justine found herself drawn to the past and an envelope her mother had once sent her, its contents revealing a mystery that stretched back to the early years of World War II and beyond, into the dark corridors of the Hospital for the Maintenance and Education of Exposed and Deserted Young Children. Established in the eighteenth century to raise “bastard” children to clean chamber pots for England’s ruling class, the institution (commonly called “The Foundling Hospital”) was tied to some of history’s most influential figures and events. From its role in the development of solitary confinement and human medical experimentation to the creation of the British Museum and the Royal Academy of Arts, its impact on Western culture continues to reverberate. It was also the environment that shaped a young girl known as Dorothy Soames, who bravely withstood years of physical and emotional abuse at the hands of a sadistic headmistress—a resilient child who dreamed of escape as German bombers rained death from the skies.
Heartbreaking, surprising, and unforgettable, The Secret Life of Dorothy Soames is the true story of one woman’s quest to understand the secrets that had poisoned her mother’s mind, and her startling discovery that her family’s fate had been sealed centuries before.

Justine Cowan was born and raised in the San Francisco Bay Area. Growing up wandering through California’s majestic redwood forests, she became a passionate environmentalist, and has spent most of her career working to protect our nation’s natural resources. Her work has been reported in The New York Times, Vanity Fair, CNN, Politico, Slate, The Hill and almost all other major news outlets. Justine received her undergraduate degree from UC Berkeley and her law degree with honors from Duke Law School where she was on the Editorial Board of the Duke Law Journal. Justine lives in Atlanta, Georgia with her husband Patrick. The Secret Life of Dorothy Soames is her first book.

Christina Baker Kline is a #1 New York Times bestselling author of eight novels, including The Exiles, Orphan Train, and A Piece of the World, Christina Baker Kline is published in 40 countries. Her novels have received the New England Prize for Fiction, the Maine Literary Award, and a Barnes & Noble Discover Award, among other prizes, and have been chosen by hundreds of communities, universities and schools as “One Book, One Read” selections. Her essays, articles, and reviews have appeared in publications such as the New York Times and the NYT Book Review, The Boston Globe, The San Francisco Chronicle, LitHub, Psychology Today, and Slate.

The Secret Life of Dorothy Soames: A Memoir (Hardcover)

The Exiles: A Novel (Hardcover)

The Exiles: A Novel (Paperback)