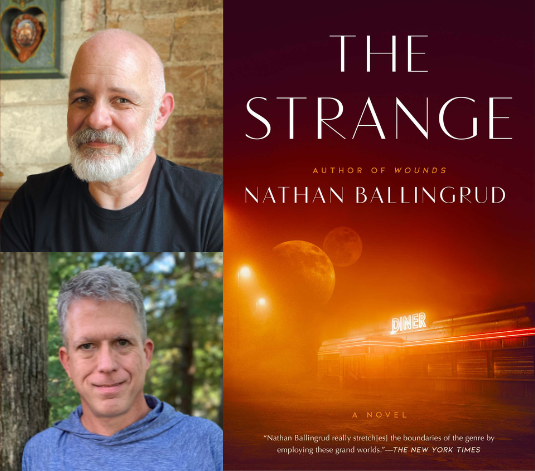 This is a hybrid event, meaning there is an option to attend virtually and a limited number of seats are available to attend the event in-store. The event is free but registration is required for both in-person and virtual attendance.

Please click here to register for the VIRTUAL event. The link required to attend will be emailed to registrants prior to the event.

Please click here to register for the IN-PERSON event. Note the important event details on the RSVP form.

This event includes a book signing. If you would like a signed book but can't attend in person, preorder HERE.

1931, New Galveston , Mars: Fourteen-year-old Anabelle Crisp sets off through the wastelands of the Strange to find Silas Mundt's gang who have stolen her mother's voice, destroyed her father, and left her solely with a need for vengeance. Since Anabelle's mother left for Earth to care for her own ailing mother, her days in New Galveston have been spent at school and her nights at her laconic father's diner with Watson, the family Kitchen Engine and dishwasher as her only companion. When the Silence came, and communication and shipments from Earth to its colonies on Mars stopped, life seemed stuck in foreboding stasis until the night Silas Mundt and his gang attacked. At once evoking the dreams of an America explored in Ray Bradbury's The Martian Chronicles and the harder realities of frontier life in Charles Portis True Grit, Ballingrud's novel is haunting in its evocation of Anabelle's quest for revenge amidst a spent and angry world accompanied by a domestic Engine, a drunken space pilot, and the toughest woman on Mars.

Nathan Ballingrud was born in Massachusetts in 1970, but spent most of his life in the South. Ballingrud is the author of the collections North American Lake Monsters and Wounds: Six stories from the Border of Hell. He’s been awarded two Shirley Jackson Awards, and have shortlisted for the World Fantasy, British Fantasy, and Bram Stoker Awards. Among other things, he has been a cook on oil rigs and barges, a waiter, and a bartender in New Orleans. He now lives in North Carolina.

Dale Bailey’s new short story collection, This Island Earth: 8 Features from the Drive-In, will be out this year. He is the author of eight previous books including In the Night Wood, The End of the End of Everything: Stories, and The Subterranean Season. His fiction has been adapted for Showtime Television, has won the Shirley Jackson Award and the International Horror Guild Award, and has been a finalist for the World Fantasy, Nebula, Locus, and Bram Stoker Awards.