The Sisters Solstice: Autumn of the Grimoire: Book One (Paperback) 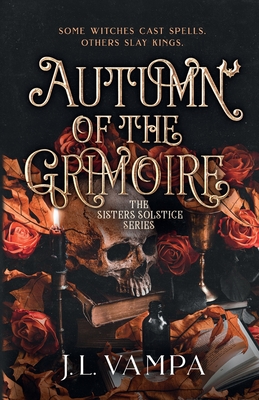 The Sisters Solstice: Autumn of the Grimoire: Book One (Paperback)

A mysterious Grimoire. A prophesied marriage full of dark secrets. And at the center of it all, a forgotten quartet of Sister witches tasked with sculpting History by magic.

When Agatha is Ordered to the fair city of Merveille by an ancient Grimoire, she expects the worst. For the past three hundred years, Agatha, Sister Autumn, has been Ordered to incite wars, kill kings, burn villages, and release plagues. While her Sisters Winter, Spring, and Summer initiate the glories of history, Agatha is left to bring the horrors.

But when the Grimoire also Orders Agatha to marry a pompous prince she's never met, and play the peasant "accepted" by vicious aristocrats, Agatha finds herself at the center of class turmoil and an age-old prophecy.

But all is not as it seems within the court: too many players are harboring dark secrets-including her new husband. And the more time she is in the castle, the more she's convinced that the long-forbidden art of magic may actually be alive and well. It will take every ounce of her cunning and bravery to bridge the gap between the peasants and the crown, unravel the mysteries of her marriage, and accept help from the most unlikely sources.

As secrets unfold, will Agatha and her Sisters continue to serve the Grimoire, or forge an uncharted History with her new allies?