The Beatles: All Our Yesterdays (Campfire Graphic Novels) (Paperback) 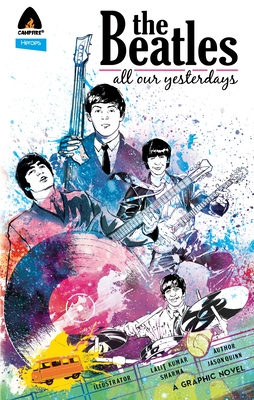 The Beatles: All Our Yesterdays (Campfire Graphic Novels) (Paperback)

The Beatles are the world's most enduring and biggest rock band ever! This is the story of their struggle for success. Taking us through the early days of rock 'n' roll, and their lives in Liverpool during the 1950s, we journey with them to Hamburg as they come of age and through grit, determination and masses of talent became the lads who made the sixties swing!

This 145 page graphic novel is part of the Campfire Graphic Novel series, which brings classics, biographies and more to graphic novel format.
Jason Quinn is the award winning author of Campfire’s Steve Jobs: Genius by Design and Gandhi: My Life is My Message. He learned to read with Marvel Comics and was devastated when his teacher told him Spider-Man did not exist. He has worked in publishing for the last twenty years as an editor and writer, working on everything from Spider-Man to Barbie. He worked as Campfire’s Creative Content Head from 2012 to 2014. His other Campfire titles include Little Alien, Genesis: From Creation to the Flood, The Beautiful Game and many others.

Lalit Kumar Sharma was born in Delhi. An artist by nature, he expresses himself through the medium of comic book art. His career as an artist began at Diamond Comics, and since then he has also worked for Raj Comics and all the leading Indian comic book publishers.
Dark, grim and dynamic drawing has always been his strong point. At Campfire he has used his strong, action-packed drawing styles to illustrate the classics, biographies, and to bring history to life. Lalit lives in his head, and works out of Delhi. Some of Lalit’s Campfire titles are World War One, World War Two: Under the Shadow of the Swastika, Muhammad Ali, and Leonardo Da Vinci.
“It’s fab gear! A story I thought I already knew, made fresh and surprising in comic strip form by a sparkling script and dazzling art.” -- Dave Gibbons, Illustrator of The Watchmen and Britain’s Comic Book Laureate

“THE BEATLES: All Our Yesterdays – That is great stuff!” -- Beatles friend and confidant since their Hamburg days and illustrator of "Revolver" cover


"This introduction to the Beatles during their formative years in the late 1950s and early '60s reveals their struggle to reach 'the toppermost of the poppermost' of the rock-music world. . . . With its strong, action-packed images and varied panel sizes, the graphic format allows a cinematic peek at the Beatles . . . A lively and informal look at the young Beatles." — Kirkus Reviews