The New Corporation: How "Good" Corporations Are Bad for Democracy (Paperback) 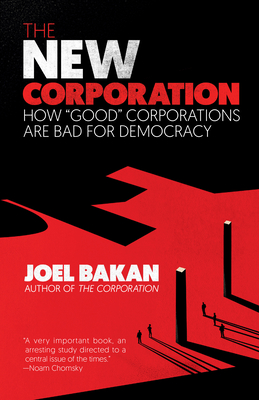 The New Corporation: How "Good" Corporations Are Bad for Democracy (Paperback)


This book is currently on backorder. Please call or email for availability.
A deeply informed and unflinching look at the way corporations have slyly rebranded themselves as socially conscious entities ready to tackle society's problems, while CEO compensation soars, income inequality is at all-time highs, and democracy sits in a precarious situation.

“A very important book, an arresting study directed to a central issue of the times” (Noam Chomsky), from the author of The Corporation: The Pathological Pursuit of Profit and Power.

Over the last decade and a half, business leaders have been calling for a new kind of capitalism. With income inequality soaring, wages stagnating, and a climate crisis escalating, they realized that they had to make social and environmental values the very core of their messaging. The problem is corporations are still, first and foremost, concerned with their bottom line.
In lucid and engaging prose, Joel Bakan documents how increasing corporate freedom encroaches on individual liberty and democracy. Through deep research and interviews with both top executives and their sharpest critics, he exposes the inhumanity and destructive force of the current order--profit-driven privatization subverting the public good, governments neglecting duties to protect the environment, the increasing alienation we experience as every aspect of life is economized, and how the Covid-19 pandemic lays bare the unjust fault lines of our corporate-led society.
Beyond diagnosing major problems, in The New Corporation Bakan narrates a hopeful path forward. He reveals how citizens around the world are fighting back and making gains in ways that bolster democracy and benefit ordinary citizens rather than the corporate elite.
Joel Bakan is a professor of law at the University of British Columbia. A Rhodes Scholar and former law clerk to Chief Justice Brian Dickson of the Supreme Court of Canada, he holds law degrees from Oxford, Harvard, and Dalhousie Universities. An internationally renowned legal authority, Bakan has written widely on law and its social and economic impact. He is the cocreator and writer of a documentary film called The New Corporation, which is based on this book.
“A rigorously argued manifesto against corporate capitalism. . . . Writing clearly and with minimal pleading to economic authority, the author closes by invoking the lessons of the pandemic, which tells us that corporate values are not those of ordinary people.” —Kirkus Reviews

“Joel Bakan’s The Corporation woke up the world to how the construction of the corporation led to a pathological economy that destroyed  nature and society. In The New Corporation, Bakan shows how the billionaires are using the rhetoric of serving society and nature to enclose the remaining commons, privatize public goods, and colonize our bodies and minds. The New Corporation is vital reading for all who are concerned to protect the public good, life, and freedom.”
—Dr. Vandana Shiva author of Earth Democracy and Oneness vs the 1%

“Impeccably researched and beautifully written, The New Corporation reveals the pillage of the planet, plunder of the poor, love of tax-cutting despots, throttling of democracy and raw crimes of today's economic behemoths. It makes clear why a new economic order is essential, and heralds the grassroots organizing that will bring it about.”
—Wendy Brown, Professor of Political Science at University of California, Berkeley, and author of In the Ruins of Neoliberalism: The Rise of Antidemocratic Politics in the West