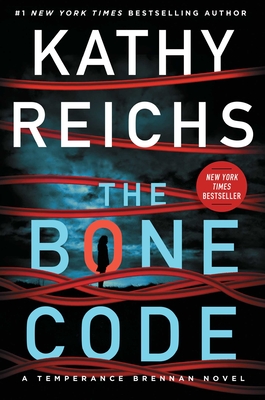 This is book number 20 in the A Temperance Brennan Novel series.

On the way to hurricane-ravaged Isle of Palms, a barrier island off the South Carolina coast, Tempe receives a call from the Charleston coroner. The storm has tossed ashore a medical waste container. Inside are two decomposed bodies wrapped in plastic and bound with electrical wire. Tempe recognizes many of the details as identical to those of an unsolved case she handled in Quebec fifteen years earlier. With a growing sense of foreboding, she travels to Montreal to gather evidence.

Meanwhile, health authorities in South Carolina become increasingly alarmed as a human flesh-eating contagion spreads. So focused is Tempe on identifying the container victims that, initially, she doesn’t register how their murders and the pestilence may be related. But she does recognize one unsettling fact. Someone is protecting a dark secret—and willing to do anything to keep it hidden.

An absorbing look at the sinister uses to which genetics can be put and featuring a cascade of ever-more-shocking revelations, The Bone Code is “a murder mystery story that races across America at the speed of fright” (James Patterson).
Kathy Reichs’s first novel Déjà Dead, published in 1997, won the Ellis Award for Best First Novel and was an international bestseller. She has written twenty-two novels featuring forensic anthropologist Temperance Brennan. Kathy was also a producer of Fox Television’s longest running scripted drama, Bones, which was based on her work and her novels. One of very few forensic anthropologists certified by the American Board of Forensic Anthropology, Kathy divides her time between Charlotte, North Carolina, and Montreal, Québec. Visit her at KathyReichs.com or follow her on Twitter @KathyReichs.
“Readers have come to expect certain things from a Brennan novel: a strong protagonist, a cast of well-drawn supporting characters, an intriguing mystery, a surprising resolution, and at least one really good scene in which Brennan puts someone in their place…Fans will happily check all those boxes here: this is A-game Reichs, with crisp prose, sharp dialogue, and plenty of suspense.”
—Booklist

“As usual in this venerable franchise, the forensics are grimly detailed, the cliffhanger chapter endings nonstop, and the range of incidents competing for attention with the issues the newest remains have thrown into the spotlight dizzying….Comfort food for fans who are far past the point of being easily shocked.”
—Kirkus Reviews

“Few crime writers are as edifying and terrifying as Kathy Reichs. She never lets you forget that “folk do the damnedest things.”
—The Times (UK)

“A strong story told in a breezy fashion with an interesting [array of] memorable minor characters.”
—Evening Standard (UK)

“I await the next Kathy Reichs thriller with the same anticipation I have for the new Lee Child or Patricia Cornwell. The Bone Code over-achieves. Temperance Brennan uses all her skills as a forensic anthropologist to solve a murder mystery story that races across America at the speed of fright.”
—James Patterson

“The Bone Code is a brilliant entry in a ground-breaking series and does Temperance Brennan proud. The story has all the elements we’ve come to expect—it’s smart, gripping, and builds to a heart-stopping crescendo.  More than twenty years ago, these wonderful novels began paving the way for other writers, especially Canadians like me, to be noticed. I owe Kathy and Tempe a debt of gratitude, not just for helping to make my own writing life possible but for hours of white-knuckle reading.”
—Louise Penny, #1 New York Times bestselling author of All the Devils Are Here

"Kathy Reichs is expert at making science both scary and thrilling, and she's in top form in The Bone Code. The story moves at such a relentless pace I couldn't stop turning the pages!"
—Tess Gerritsen, New York Times bestselling author of Choose Me

“Over the course of twenty books, Kathy Reichs and Tempe Brennan have thrilled readers with pacey, mazey tales grounded in real science, with plots springing from the author's prodigious knowledge and passion for truth and justice.  We readers are truly grateful—and looking forward to the next twenty!”
—Ian Rankin, New York Times bestselling author of the Inspector Rebus novels