A Field Guide to Demons, Vampires, Fallen Angels, and Other Subversive Spirits (Hardcover) 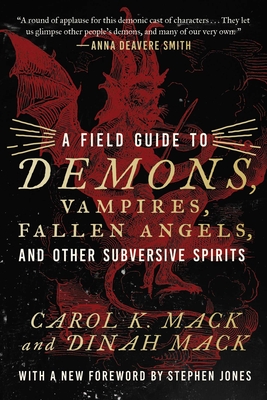 A Field Guide to Demons, Vampires, Fallen Angels, and Other Subversive Spirits (Hardcover)


On Our Shelves Now
Now back in print in a new gift format, the classic field guide to the demons that have never stopped inhabiting our world.

If you met a werewolf on the eve of a full moon, would you know how to tell what he really was? Could you resist the dark charms of a vampire or the lure of a fallen angel? Did you know that the razor-sharp tail of the Mbulu of South Africa has a mind of its own? Or that the Kuru-Pira of Brazil has eyes that glow like embers and fangs ripping from its mouth? In this updated edition of A Field Guide to Demons, Carol and Dinah Mack bring to life some of the most horrific and fascinating creatures ever described in lore and legend. With a deft pen and global perspective,they profile more than ninety bogies including demons, fairies, ghouls, mermaids, vampires, kelpies, werewolves, and more.

Readers will delight in exploring the origin, characteristics, and cultural significance of each creature. Organized by habitat, and offering helpful dispelling and disarming techniques in every instance, A Field Guide to Demons will entertain readers of all ages while shedding light on religious and cultural traditions from around the world. It is a must for students, writers, academics, aspiring demon watchers, and anyone interested in mythology or the occult.

This edition has a new foreword by Stephen Jones.
Carol K. Mack is an award-winning playwright with a lifetime interest in mythology and an MA in religious studies from NYU, where she also taught fiction writing for many years. Her recent collaborative work Seven has traveled the world. Visit her website at www.carolkmack.com. She lives in Fairfield, Connecticut.

Dinah Mack has a BA in religious studies and graduate degrees in both cultural anthropology and education. She has been a middle school social studies teacher for close to two decades and has years of experience teaching technology integration workshops for teachers. She is the author of a YA novel, The Pirates of Cologne (2017, Levellers Press), and has published curricula for the New York Times Learning Network and other organizations. She lives in western Massachusetts.

Stephen Jones is one of Britain’s most acclaimed horror and dark fantasy writers and editors. He is a Hugo Award nominee and the winner of four World Fantasy Awards, three International Horror Guild Awards, five Bram Stoker Awards, twenty-one British Fantasy Awards and a Lifetime Achievement Award from the Horror Writers Association. He has more than 160 books to his credit, including The Lovecraft Squad and Zombie Apocalypse! series, and twenty-eight volumes of Best New Horror anthologies. Visit his web site at www.stephenjoneseditor.com or follow him on Facebook at stephenjones-editor. He lives in London, England.
"A round of applause for this demonic cast of characters! They let us glimpse other people's demons, and many of our very own."—Anna Deavere Smith

"Scouring the face of the earth, Carol and Dinah Mack have come up with an array of the most dreaded demons mythology has to offer."—Robert L. Carneiro, Curator of South American Ethnology, American Museum of Natural History

"An assembly of the weird and wonderful presences we know as demons. By capturing them in vivid narrative portraits, she has, in a remarkable combination of scholarship and art, produced a book that belongs in every library—and by every campfire!"—James P. Carse, author of Finite and Infinite Games

"The Macks' vast knowledge of all things demonic—not to mention vampiric—is equalled only by their passion for the subject. Demonology by way of cryptozoology."—Steven Schneider, executive producer, Paranormal Activity (Paramount Pictures), editor of Horror Film and Psychoanalysis: Freud's Worst Nightmare