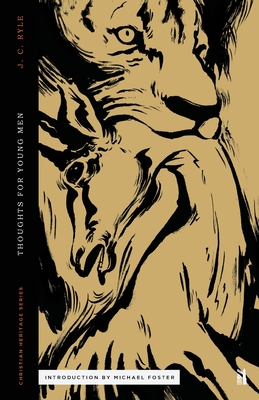 " Ryle] was a beast. His sturdy frame stood well over six foot. He was an accomplished oarsman and co-captain of a cricket team. And he wasn't just athletically disciplined-he excelled in academics, always near the top of his class. His physical and intellectual prowess is all the more impressive when you consider that he came from a wealthy family. He could have chosen to live as a mollycoddled rich boy, but instead he pursued a life of rigor. Ryle was tough by choice. Ministry wasn't a way for him to escape manliness, but rather to exercise it." from Michael Foster's Introduction

Solomon says that the glory of young men is their strength (Prov. 20:29). Young men have so much to give the Church, but sadly the modern Church has taught them nothing about how to exercise their strength in a godly way. This book by 19th century pastor J.C. Ryle is short, but gives young men what they need: straight talk about being a Christian man. Ryle does not mince words when describing the temptations to pride, lust, laziness, and more. The devil is like a roaring lion who wants to devour young men, and the only way to defeat him is to fight sin and be like Jesus. This classic is a powerful reminder from a wise man about how to be strong in the Lord and to give no opportunity to the devil. Read it and go, fight, win.

"Young men, this enemy is working hard for your destruction, however little you may think it. You are the prize for which he is specially contending for. He foresees you must either be the blessings or the curses of your day, and he is trying hard to effect a place in your hearts early in your life, in order that you may help advance his kingdom each day.... Whether you will hear or not, I cannot, dare not, leave you alone." J.C. Ryle