Elizabeth I: Women Who Were Kings (Paperback) 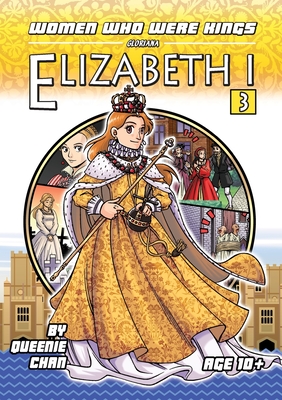 Elizabeth I: Women Who Were Kings (Paperback)

In the third of the "Women Who Were Kings" series, we follow the life of one of England's most celebrated monarchs--Queen Elizabeth I. From her difficult early childhood and her struggle to ascend to a throne that would later see her as the progenitor of a Golden Age, this story aims to chart Elizabeth's political struggles amidst the wider religious turmoil in Europe at the time.

Elizabeth always kept her own counsel, and as the "Virgin Queen", it was never easy to know what she was thinking. More reactive than proactive, her remarkable reign nonetheless laid the foundations for the later British Empire, even at great personal cost. What were her small personal triumphs, and private moments of despair? What is her story?

Properly researched, lavishly illustrated, and with footnotes and a bibliography, this graphic novel biography is suited for anyone with an interest in one of England's most famous monarch. For Ages 10+.