The Fallacy of Materialism (Paperback) 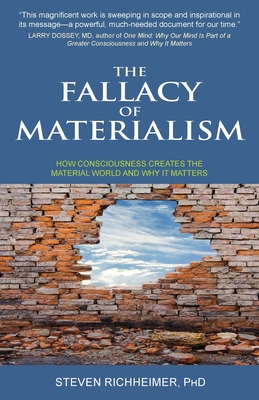 The Fallacy of Materialism (Paperback)

"This magnificent work is sweeping in scope and inspirational in its message - a powerful, much-needed document for our time." - Larry Dossey, MD, author of One Mind: Why Our Mind Is Part of a Greater Consciousness and Why It Matters

﻿﻿For people today, materialism is the most common lens through which they view reality. This is despite the fact that there is overwhelming scientific evidence that disproves this morbid worldview. The evidence includes the important part that consciousness plays in how we perceive and experience reality; the "observation problem" and nonlocality of the quantum realm; the connection between space and time in Einstein's theory of relativity; and the fact that paranormal phenomena such as ESP, mystical experiences, near-death experiences, and reincarnation memories are fundamental aspects of human experience. In this book, Dr. Richheimer presents an alternate vision of reality that he calls the spiritual worldview. This model of reality portrays creation as cyclical in nature-beginning and ending with cosmic consciousness. It offers a logical, scientifically sound explanation for phenomena that materialism fails to explain or attempts to deny. In addition, the author explores why scientists find it difficult to reject materialism, and how the adoption of the materialist worldview by most scientists and intellectuals is a root cause of many of society's problems.