Peaks and Bandits: The Classic of Norwegian Literature (Paperback) 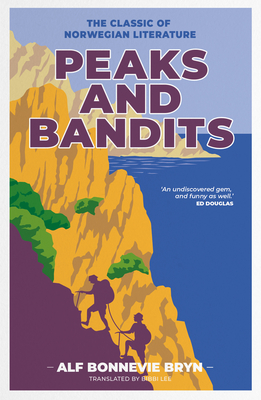 Peaks and Bandits: The Classic of Norwegian Literature (Paperback)

In 1909, while dreaming of the Himalaya, Norwegian mountaineer Alf Bonnevie Bryn and a fellow young climber, the Australian George Ingle Finch, set their sights on Corsica to build their experience. The events of this memorable trip form the basis of Bryn's acclaimed book Tinder og banditter - 'Peaks and Bandits', with their boisterous exploits delighting Norwegian readers for generations. Newly translated by Bibbi Lee, this classic of Norwegian literature is available for the first time in English.

Although Bryn would go on to become a respected mountaineer and author, and Finch would become regarded as one of the greatest mountaineers of all time - a legend of the 1922 Everest expedition - Peaks and Bandits captures them on the cusp of these achievements: simply two students taking advantage of their Easter holidays, their escapades driven by their passion for climbing. As they find themselves in unexpected and often strange places, Bryn's sharp and jubilant narrative epitomises travel writing at its best.

Balancing its wit with fascinating insight into life in early twentieth-century Corsica, the infectious enthusiasm of Bryn's narrative has cemented it as one of Norway's most treasured adventure books. Peaks and Bandits embodies the timeless joy of adventure.

Alf Bonnevie Bryn (1889-1949) was a Norwegian mountaineer, author and engineer. Throwing himself into his passion for climbing while studying in Switzerland, he not only co-founded the Norsk Tindeklub mountaineering club but made several first ascents in 1910, including the Norwegian peaks of Stetind, Trakta and Klokketind. After graduating, Bryn went on to have successful careers as both an engineer and author, publishing a series of detective novels. His most popular work remains Tinder og Banditter - 'Peaks and Bandits', first published in 1943, which recounts his climbing escapades in Corsica with George Ingle Finch in 1909.