The Last to Vanish (CD-Audio) 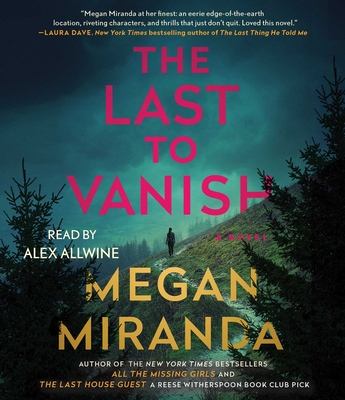 The Last to Vanish (CD-Audio)

“I really enjoyed the mystery and how it unraveled for Abigail and Trey, and how the disappearances are connected. Megan Miranda is a great writer and I am always eager to read her new books — this didn’t disappoint!”
— Stephanie Rivera, Chapter Two...a Bookstore, Lompoc, CA

“This eerie thriller…can stand next to Shirley Jackson’s The Haunting of Hill House and Stephen King’s The Shining.” —Booklist (starred review)

New York Times bestselling author Megan Miranda returns with a gripping and propulsive thriller that opens with the disappearance of a journalist who is investigating a string of vanishings in the resort town of Cutter’s Pass—will its dark secrets finally be revealed?

Ten years ago, Abigail Lovett fell into a job she loves, managing The Passage Inn, a cozy, upscale resort nestled in the North Carolina mountain town of Cutter’s Pass. Cutter’s Pass is best known for its outdoor offerings—rafting and hiking, with access to the Appalachian trail by way of a gorgeous waterfall—and its mysterious history. As the book begins, the string of unsolved disappearances that has haunted the town is once again thrust into the spotlight when journalist Landon West, who was staying at the inn to investigate the story of the vanishing trail, then disappears himself.

Abby has sometimes felt like an outsider within the community, but she’s come to view Cutter’s Pass as her home. When Landon’s brother Trey shows up looking for answers, Abby can’t help but feel the town closing ranks. And she’s still on the outside. When she finds incriminating evidence that may bring them closer to the truth, Abby soon discovers how little she knows about her coworkers, neighbors, and even those closest to her.

Megan Miranda brings her best writing to The Last to Vanish, a riveting thriller filled with taut suspense and shocking twists that will keep you guessing until the very end.
Megan Miranda is the New York Times bestselling author of All the Missing Girls; The Perfect Stranger; The Last House Guest, a Reese Witherspoon Book Club Pick; The Girl from Widow Hills; Such a Quiet Place; and The Last to Vanish. She has also written several books for young adults. She grew up in New Jersey, graduated from MIT, and lives in North Carolina with her husband and two children. Follow @MeganLMiranda on Twitter and Instagram, @AuthorMeganMiranda on Facebook, and visit MeganMiranda.com
"The lodge in Cutter’s Pass, North Carolina, along the Appalachian Trail, has been the site of a
series of disappearances. First, four college students went missing, then two lone women
(several years apart) never returned, and finally a journalist who was trying to solve those
mysteries vanished. Four years after the journalist’s disappearance, his brother, Trey, appears,
determined to find out what happened to him. He attempts to join forces with a local, Abby, but
neither fully trusts the other. The town is filled with secrets, and Abby, who has lived there for ten
years, has much she’s unwilling to share. Creepiness builds steadily in this atmospheric story as
one by one these secrets are revealed. The story is told from Abby’s perspective, and reader
Allwine reads the protagonist's thoughts and words with a no-nonsense tone that fits well with
Abby’s character. Others are voiced convincingly, and Allwine has a firm hold on the growing
suspense. There are plenty of surprises, and listeners will catch themselves gasping as the story
builds to a climax."
— Candace Smith