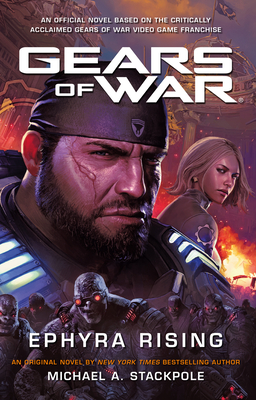 By Michael A. Stackpole


Not Currently On Our Shelves. Usually Ships in 1-5 Days.
An original Gears of War novel, exclusively detailing the aftermath of the Locust War written by New York Times bestselling author Michael A. Stackpole.

The Locust War has ended with an energy weapon that pulsed across the land, destroying Locust and Lambent alike. The world is in shambles and the few survivors are isolated from one another. Humanity must begin anew.

With most of Sera’s civilization destroyed, Sergeant Marcus Fenix and Lieutenant Anya Stroud must somehow rebuild on the ruins. For Marcus, his purpose is impossible to grasp. With no clear enemy to fight, there may be no place left for him in this postwar world. Some call him hero, others view him with resentment.

As Anya struggles to create alliances to re-form the Coalition of Ordered Governments, she quickly discovers how impossible it is to tell friend from foe. Then whispers of Locust still stalking the land begin to spread. Fearing the worst, Marcus sets out to assess the potential threat. As he searches for Locust survivors, he quickly discovers that the new enemy may be all-too-human, and utterly ruthless.
Michael A. Stackpole is the multiple New York Times bestselling author of over forty fantasy and science fiction novels, his best known books written in the Star Wars® universe, including I, Jedi and Rogue Squadron, as well as the X-Wing graphic novel series. He has also written in the Conan, Pathfinder, BattleTech and World of Warcraft universes, among others.

Currently the Virginia G. Piper Center for Creative Writing at Arizona State University Distinguished Writer-in-Residence, Stackpole’s other honors include: Induction into the Academy Gaming Arts and Design Hall of Fame, a Parsec Award for “Best Podcast Short Story,” and a Topps’s selection as Best Star Wars® Comic Book Writer. Stackpole is the first author to sell work in Apple’s App Store, and he’s been an advocate for authors taking advantage of the digital revolution.

"Highly recommended for readers of military science fiction and the Gears of War universe.  A surprisingly different but fascinating look at the Gears characters" - Borg.com

"While the chainsaws, machismo and bro-dudeness of the franchise takecentre stage there’s still an interesting world and lore behind it all, and a cast of likeable people. Novels are a perfect opportunity to explore that world... Ephyra Rising is a solid read." - Wolf's Gaming Blog

"Fans of Gears of War who, like myself, love the characters and the world and want to see more of it and learn about the gaps between the games are definitely going to enjoy this book... As much a character piece as an action story, this was an absolute delight from start to finish."
Trans-Scribe review


PRAISE FOR GEARS OF WAR 3:

"Gears of War 3 represents state-of-the-art design and gameplay where you become the king badass among a gory world of bad-asses."
IGN

"A masterpiece of exciting gameplay and emotional storytelling that stands head and shoulders above its predecessors. Even if you don't remember where you were on Emergence Day, this is one adventure you won't soon forget."
GameSpot

"This isn't a game you'll be bored with in a month, and it will last many fans years…"
Wired

"Gears 5 is one of the most visually stunning games ever crafted."
Sam Bryford, The Verge

"The Coalition has simply knocked it out of the park with Gears 5."
Elton Jones, Heavy

"Amazing. No matter which mode you approach it from, Gears 5 is an incredibly fun and polished game."
Ryan McCaffrey, IGN

"Opening the door to more creative and meaningful artistic direction helps titles restore energy to games. Gears 5 feels like one of the most fast-paced, exciting titles in the series"
Esquire

PRAISE FOR AUTHOR MICHAEL A. STACKPOLE:

"Mike Stackpole… can draw readily on considerable experience. When he wants to be tough, or whimsical, or demented, it is not the chore it might be for many another. He has it all there, ready."
Roger Zelazny, author of the Chronicles of Amber

"I think that Michael A. Stackpole is incapable of writing a book that isn’t imaginative, intelligent and sympathetic"
Stephen R. Donaldson, author of the Thomas Covenant series

PRAISE FOR FORTRESS DRACONIS BY MICHAEL A. STACKPOLE:

"A powerful epic fantasy that is wholly grounded in the gritty realism of battlefields and sacrifices."
Romantic Times