The Ballad of Cherrystoke and Other Stories (Paperback) 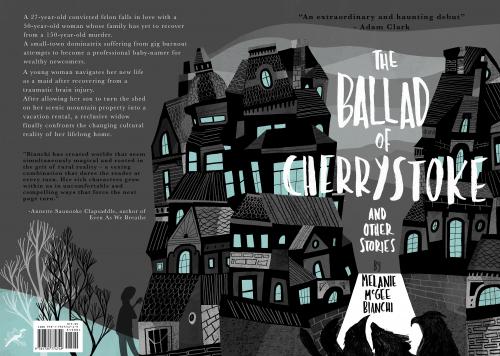 The Ballad of Cherrystoke and Other Stories (Paperback)


On Our Shelves Now
A young maid at an upscale resort hides her banjo-playing freight hopper brother. An unlikely romance bridges a quarter-century age gap and a 150-year-old murder. A man tries to turn his sheltered mother’s backyard shed into a pricey vacation rental. A gig worker must shake off her darker identity to become a professional baby namer. This mesmeric debut collection of stories set in the Appalachian mountains weaves together the curious and the sublime, with Bianchi’s lyrical style cutting straight to the heart of the matter.
Melanie McGee Bianchi grew up in a series of character-forming historic houses in different parts of the U.S. Starting at age 12, she gathered modest notice on the spelling-bee circuit, won short-story contests in various newspapers, and placed poems and fiction in national print publications, including the grunge-era teen magazine Sassy. After university, she began a career in features journalism in Asheville, North Carolina, where she has lived most of her life. Melanie was the lead arts reporter and Arts & Entertainment Editor at Mountain Xpress, a member paper of the Association of Alternative Newsweeklies, for ten years. She interviewed celebrities of many genres, including Loretta Lynn, David Sedaris, Aimee Mann, the late R.L. Burnside, and the late Doc Watson. In 2004, she won an industry Gold Award for special-section editing. ​ After five happy years as a stay-at-home mom, Melanie next edited VERVE, a women’s magazine, for a period in the 2010s, working with Venezuelan fashion photographer Zaire Kacz and model/stylist Sara Fields Bridges. Melanie currently manages three regional lifestyle publications: Asheville Made, Bold Life, and Carolina Home + Garden. Her humor essays have been published regionally and nationally, and her poetry has been shortlisted in national chapbook contests and nominated for a Pushcart Prize. Melanie’s current fiction has appeared in The Mississippi Review’s Summer Prize Issue, in Chattahoochee Review, and in The Moth Magazine (based in Co. Cavan, Ireland). These pieces and more are included in her first book, The Ballad of Cherrystoke + Other Stories, forthcoming from Blackwater Press in 2022. The Ballad of Cherrystoke explores gentrification and culture clash in the mountain South — the destination area of Appalachia where the Great Smokies form a billion-year-old ring with the Blue Ridge; where the celebrated natural landscape meets complicated contemporary interests. These are the stories of the area’s important everyday people, a subtly music-infused narrative conveyed without a note of sentimentality.

“Through deep lyricism and a sharp eye for detail, Melanie McGee Bianchi’s stories peel back the quotidian moments of everyday life to demonstrate the complexity of what it means to live in a world crafted by both our desires and our choices — and what it means when those two elements don’t always coincide. Ballad of Cherrystoke and Other Stories is a powerful collection that uncovers the music of humanity that emerges each time a person interacts with another person in a complicated and changing world. It’s an extraordinary and haunting debut.
— Adam Clay, director, Center for Writers at the University of Southern Mississippi; author of To Make Room for the Sea, Stranger, and A Hotel Lobby at the Edge of the World (Milkweed Editions); editor of Mississippi Review, co-editor of Typo Magazine, and contributing editor for Kenyon Review


“Yuri in ‘Abdiel's Revenge’ says: “If there’s a main idea in all those ballads, in all of Appala-chia, to my mind, it comes down to this: bones in the river.’ Ballad of Cherrystoke + Other Stories is a collection about Appalachian people (not characters, not stereotypes) with se-crets and trust issues, brain injuries, prison records, sh**ty jobs, broken hearts, urges and needs and fears — but Bianchi is observant and wise, kind but unflinching, an archaeolo-gist; she listens, and excavates, and through rich and luxuriously meandering prose pulls those bones up on the bank for us to touch, and taste, and feel. This is the best debut col-lection I’ve read in years; Melanie McGee Bianchi is sharp, and tender, and brilliant.
— Meagan Lucas, author of the award-winning novel Songbirds and Stray Dogs and Editor-in-Chief of Reckon Review.


“The narrators in this collection shrug off their own wounds to observe and report their fascinating stories. With language as striking and surprising as it is beautiful, Bianchi adds a new and unique voice to Appalachian literature.”

“Brilliantly weaving together original narratives with elements of the real Appalachian mountains and their people, these stories reveal startling details that create immediate, visceral impressions of complex, haunting characters: their secrets, their fears, and their anguish. … Like the mountains they inhabit, these characters are a mercurial parade of startling beauty and terrible pain.”

"Bianchi has created worlds that seem simultaneously magical and rooted in the grit of rural reality – a vexing combination that dares the reader at every turn. Her rich charac-ters grow within us in uncomfortable and compelling ways that force the next page turn."

-Annette Saunooke Clapsaddle, author of Even As We Breathe

"The complex, the quirky, and the sublime are interwoven with humor, love, and above all, grace, in contributing to a tradition of powerful storytelling. The landscape is steeped in the voices of the people."

Tony Robles, author of Cool Don't Live Here No More — A Letter to San Francisco and Finger-prints of a Hunger Strike