Proof of Life: Twenty Days on the Hunt for a Missing Person in the Middle East (Hardcover) 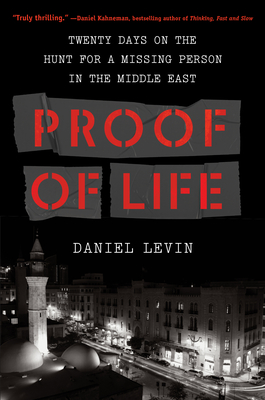 Proof of Life: Twenty Days on the Hunt for a Missing Person in the Middle East (Hardcover)


This book is currently on backorder. Please call or email for availability.
“Riveting . . . Well-written and highly compelling."—Wall Street Journal

​“Truly thrilling. Daniel Levin brilliantly conveys both the menace and the evil of Middle Eastern intrigue, and some victories of human kindness over cruelty and despair.”—Daniel Kahneman, New York Times bestselling author of Thinking, Fast and Slow

Daniel Levin was in his New York office when he got a call from an acquaintance with an urgent, cryptic request to meet in Paris. A young man had gone missing in Syria. No government, embassy, or intelligence agency would help. Could he? Would he? So begins a suspenseful, shocking, and at times brutal true story of one man’s search to find a miss­ing person in Syria over twenty tense days. Levin, a lawyer turned armed-conflict negotia­tor, chases leads throughout the Middle East, meeting with powerful sheikhs, drug lords, and sex traffickers in his pursuit of the truth.

In Proof of Life, Levin dives deep into the shadows—an underground industry of war where everything is for sale, including arms, drugs, and even people. He offers a fasci­nating study of how people use leverage to get what they want from one another and of a place where no one does a favor without wanting something in return, whether it’s immediately or years down the road.

A fast-paced thriller wrapped in a memoir, Proof of Life is a cinematic must-read by an author with access to a world that usually remains hidden.

The son of a diplomat, Daniel Levin spent his early years in the Middle East and in Africa and then trained as a lawyer. Currently a board member of the Liechtenstein Foundation for State Governance, he has, for the past twenty years, worked with governments and development institutions worldwide, focusing on economic development and political reform through financial literacy, political inclusion, and constitutional initiatives. He is also engaged in Track 3 diplomacy and mediation efforts in war zones. Levin’s first book, Nothing but a Circus: Misadventures Among the Powerful, was published in Germany, Japan, Russia, and the UK. Proof of Life is his first book to be published in the United States. He lives outside New York City.
“Riveting . . . . Well-written and highly compelling . . . Mr. Levin seems to grasp the region’s complexity, but instead of flaunting his insider status he draws the reader into the picture. This is a welcome departure from other books on the region that let their authors’ views overshadow the subjects’ stories. On the surface, Proof of Life is a thrilling account of intrigue and espionage, but lurking underneath are important lessons on the Syrian conflict and the entrenched interests that will make ending the war—and curtailing the massive profits it provides to a new elite—a difficult prospect."
—Wall Street Journal

“A portrait of a contemporary morass in the Middle East emerges, as Levin thoughtfully interrogates the signs of hope and hopelessness.”
—CrimeReads

“Levin’s story is not an easy one to experience, but it is an important one.”
—Booklist

“It is rare to understand the Middle East and the Gulf so accurately, including the West's hypocrisy and the emptiness of these skyscraper cities, in which some people help sincerely, while others, who share our blood, are so willing to shed it. Daniel Levin got it all right in Proof of Life.”
—Alaa Al-Siddiq, Executive Director of ALQST for Human Rights

“Adroitly navigating myriad cultures, linguistic barriers, and dangerous situations, Levin shows that individuals can and do make a difference in the face of profound adversity. In laying bare the raw human toll of the ferocious and cruel Syrian conflict, Proof of Life asks the reader to make a choice between cynicism and compassion for Syria and for all those who continue to suffer.”
—Ayaan Hirsi Ali, New York Times bestselling author of Infidel

“From the first to final page, I couldn’t stop reading. Proof of Life is a penetrating portrait of how the Middle East operates through webs of power that dehumanize all but a special few. Compelling!”
—Karen Elliott House, Pulitzer Prize winner and author of On Saudi Arabia

“For much of the last decade, Syria has been proclaimed the world’s ‘worst humanitarian disaster,’ but for most of us its horrors are so far removed from our daily lives that those words mean little. Nobody can say that after reading this gripping book by Daniel Levin.”
—Ian Bremmer, President, Eurasia Group, and New York Times bestselling author of Us vs. Them

“Daniel Levin is a rarity — one of those people who knows how the world really works—and his pulsating tale of a hostage rescue mission in the badlands of the Middle East is in a genre of its own.”
—Tom Wright, New York Times bestselling author of Billion Dollar Whale: The Man Who Fooled Wall Street, Hollywood, and the World

“Proof of Life is a true James Bond story for our time, whose hero carries a voice recorder instead of a gun. The portraits of Beirut and Dubai, and the horrors of the Syrian war are devastating.”
—Helen C. Epstein, author of Another Fine Mess: America, Uganda, and the War on Terror

“Daniel Levin tells the story of Syria’s complex web of armed groups, political interests, and social issues through the lens of a single story. Few books capture the depth of Syria’s tragedy and the human dimension like Proof of Life.”
—Vali Nasr, Professor of Middle East Studies, Johns Hopkins University, and New York Times bestselling author of The Shia Revival

“Like a true-life Graham Greene novel, Proof of Life is the behind-the-scenes story of intrigue, danger, kidnapping, and negotiation inside Syria’s brutal civil war. How do wars really look up close—and how can they end? Daniel Levin has brought years of political experience to write a book that moves from Beirut to Istanbul to New York and Paris effortlessly like the best of all thrillers—and that illuminates one of the most complicated and tragic conflicts in modern history.”
—Janine di Giovanni, Senior Fellow, Yale Jackson Institute, and National Magazine award-winning author of The Morning They Came for Us

“Proof of Life exposes the exploitation of the most vulnerable and the depravity of those responsible. Yet it also offers a glimpse of an alternative, beautiful outcome when a few people decide to help. A must-read!”
—Hala Al-Dosari, recipient of Human Rights Watch’s Alison Des Forges Award for Extraordinary Activism