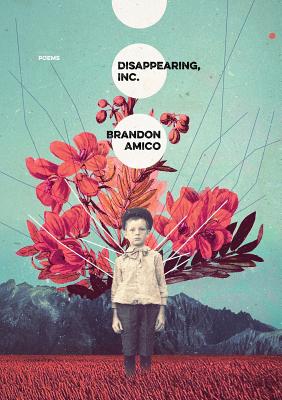 "My hour with the therapist / is not practice for a stand-up career, I am told," asserts this book in its opening pages. But humor is never far away in Brandon Amico's Disappearing, Inc. If Karl Marx had worked the Catskills, he might have sounded like this. The voice is ringing, relentless, droll and canny, and the poems crackle with energy as they joke and juke their way to exploring what it means to live a fully human life in the media-technogasm of 21st century capitalism. How might we live differently? these poems wonder, with ache and tender imagining, offering us the reminder that punchlines punch, and we are left breathless.

Brandon Amico's use of language is ecstatic. His lines rattle with wit, uncanny phrasing, up-to-the-minute diction, and a mischievous voice that both astonishes and consoles. "I will buy you a cell phone the size and luster of Paris," one poem begins. The linguistic exuberance in Disappearing, Inc. echoes our relentless times. Amico's vision is enthralling and memorable.

Disappearing, Inc. is an important book, a collection of poetry that so fully immerses itself in our particularly insidious, yet seductive, capitalist moment that it writes both of and from it. With poems on consumerism, social media, and other contemporary headaches, Brandon Amico twists our notion of the American dream as he shows us just how twisted it's become. Commerce, branding, and the endless supply of information and misinformation have become relentless, and Amico skillfully mirrors that overwhelm with his deft use of rhythm and line. Disappearing, Inc. shines a light on our current entanglements in a way only poetry can, revealing them as both a mask for, and a contributor to, loneliness and longing.

"You With the pulse " shouts the poem "Compulsion," and just like the targets of every clever marketing pitch, readers of Brandon Amico's debut book can't help but buy into his wit, his keen eye for the insidious in the everyday, his understanding of loneliness in a throng, his attention to language. These poems take on student debt, dying bees, preference algorithms, political posturing, consumer satiation, and more; they're both timely and tomorrow, a critique of what American society is selling and our complicity in the sale.

Brandon Amico's debut collection orbits a dark star that burns with questions of money, value, worth. The gravity of consequence is fierce in these urgent poems; their concurrent menace and vulnerability is uniquely unsettling.