Owning the Sun: A People's History of Monopoly Medicine from Aspirin to COVID-19 Vaccines (Hardcover) 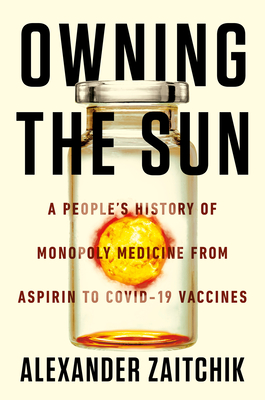 Owning the Sun: A People's History of Monopoly Medicine from Aspirin to COVID-19 Vaccines (Hardcover)


Not Currently On Our Shelves. Usually Ships in 1-5 Days.
For readers of Bad Blood and Empire of Pain, an authoritative look at monopoly medicine from the dawn of patents through the race for COVID-19 vaccines and how the privatization of public science has prioritized profits over people

Owning the Sun tells the story of one of the most contentious fights in human history: the legal right to produce lifesaving medicines. Medical science began as a discipline geared toward the betterment of all human life, but the merging of research with intellectual property and the rise of the pharmaceutical industry warped and eventually undermined its ethical foundations. Since World War II, federally funded research has facilitated most major medical breakthroughs, yet these drugs are often wholly controlled by price-gouging corporations with growing international ambitions. Why does the U.S. government fund the development of medical science in the name of the public only to relinquish exclusive rights to drug companies, and how does such a system impoverish us, weaken our responses to crises, and, as in the cases of AIDS and COVID-19, put the world at risk?

Outlining how generations of public health and science advocates have attempted to hold the line against Big Pharma and their allies in government, Alexander Zaitchik’s first-of-its-kind history documents the rise of privatized medicine in the United States and its subsequent globalization. From the controversial arrival of patent-wielding German drug firms in the late nineteenth century to present-day coordination between industry and philanthropic organizations—including the influential Bill & Melinda Gates Foundation—that stymie international efforts to vaccinate the world against COVID-19, Owning the Sun tells one of the most important and least understood histories of our time.
Alexander Zaitchik is a freelance journalist. His writing has appeared in The Nation, The New Republic, The Intercept, The Guardian, Rolling Stone, Foreign Policy, VICE, and The Baffler, among many other publications. This is his third book. He lives in New Orleans.
"Argument starter, thought-provoker, question-asker, Owning the Sun is a book you need to read now." —Terri Schlichenmeyer, The Goshen News

“The history of the rise of patented and monopolized medicine is extremely complex, but Zaitchik manages to effectively weave that history together to show just how much institutional science and medicine has changed since the beginning of the twentieth century.” —Nicholas Greyson Ward, The Progressive

"A brave and timely reminder . . . A trenchant study of the dangers of turning medical knowledge into private intellectual property." —Kirkus Reviews

"Journalist Zaitchik (The Gilded Rage) takes readers through the labyrinthine history of medical patents in this expansive study . . . Zaitchik covers a remarkable amount of ground and never gets lost in the weeds. The result is comprehensive and illuminating." —Publishers Weekly

"Riveting. Owning the Sun masterfully explains how Big Pharma methodically gained global control over the largely public-funded 'intellectual property' required to manufacture new therapies (like the COVID-19 vaccines). A must read for those wanting to understand how this unfolded." —John Abramson, M.D., author of Sickening: How Big Pharma Broke American Health Care and How We Can Repair It