Truffle Hound: On the Trail of the World’s Most Seductive Scent, with Dreamers, Schemers, and Some Extraordinary Dogs (Hardcover) 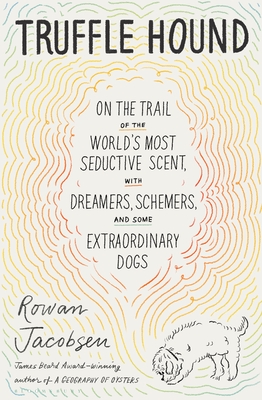 Truffle Hound: On the Trail of the World’s Most Seductive Scent, with Dreamers, Schemers, and Some Extraordinary Dogs (Hardcover)

A Publishers Weekly Best Book of the Year

A captivating exploration into the secretive and sensuous world of truffles, the elusive food that has captured hearts, imaginations, and palates worldwide.

The scent of one freshly unearthed white truffle in Barolo was all it took to lead Rowan Jacobsen down a rabbit hole into a world of secretive hunts, misty woods, black-market deals, obsessive chefs, quixotic scientists, muddy dogs, maddening smells, and some of the most memorable meals ever created.

Truffles attract dreamers, schemers, and sensualists. People spend years training dogs to find them underground. They plant forests of oaks and wait a decade for truffles to appear. They pay $6,000 a pound to possess them. They turn into quivering puddles in their presence. Why?

Truffle Hound is the fascinating account of Rowan's quest to find out, a journey that would lead him from Italy to Istria, Hungary, Spain, England, and North America. Both an entertaining odyssey and a manifesto, Truffle Hound demystifies truffles—and then remystifies them, freeing them from their gilded cage and returning them to their roots as a sacred offering from the forest. It helps people understand why they respond so strongly to that crazy smell, shows them there’s more to truffles than they ever imagined, and gives them all the tools they need to take their own truffle love to the next level. Deeply informed, unabashedly passionate, rakishly readable, Truffle Hound will spark America’s next great culinary passion.

Rowan Jacobsen is the author of the James Beard Award-winning A Geography of Oysters as well as American Terroir, Apples of Uncommon Character, and other books. His books have been named to numerous top ten lists, and he has been featured on All Things Considered, The Splendid Table, Morning Edition, and CBS This Morning, and in the pages of Bon Appétit, Saveur, the Wall Street Journal, the Washington Post, and elsewhere. He lives in Vermont.

“Jacobsen captivates with this dual narrative, both an eloquent and sensuous treatise on truffles and the enthralling story of his obsessive quest to learn everything there is to know about them… Jacobsen offers a thrilling dive into the secretive and lucrative world ‘of this subterranean wonder.’ The real delicacy here, though, is the arresting prose used to convey his reverence and awe.” - Publishers Weekly, starred review

“A Mark Kurlansky–esque romp through the science, history, and culture surrounding that most elusive of foodstuffs, the truffle…The author depicts a culture of truffle finding, trading, and eating that is as complex as the aromatic stew of ingredients that goes into one, and he commits to paper lovely images that combine both intrigue and a certain level of surrealism….It’s an altogether delightful narrative. Fans of pungent flavors—and pungent prose—will enjoy this mouthwatering grand tour of a culinary treasure.” - Kirkus Reviews, starred review

“A deep dive into all things truffle…well written and full of interesting characters and fascinating facts.” - Library Journal

“Jacobsen goes on a fruitful quest to discover what makes truffle one of the most sought-after ingredients in the world… You'll leave Truffle Hound understanding why people feel so strongly about truffles and how to appreciate the extraordinary fungi.” - Veranda, "25 Best New Books To Cozy Up With This Fall"

“A worldwide catalog of truffle resources invites exploration, and some recipes give ideas for using the bounty.” - Booklist

“Jacobsen delves into the sometimes twisting history of this food, as well as into the science that makes truffle farming possible. Even as he examines the fungi’s complex history and analyzes questions about who gets access to truffles, Jacobsen’s writing remains accessible, unlike the costly object of his desire. Truffle Hound is a compelling story, but Jacobsen doesn’t leave readers empty-handed when the tale ends. The book also includes a glossary of truffle types, resources for acquiring your own truffles and recipes for after the decadent fungi arrives. It’s an appropriate finish to a delicious book.” - BookPage

"Jacobsen sheds light on the opaque fungus, with the help of a passionate and eccentric cast, including the Grand Master of the Saint Ladislaus Order of Truffle Knights in Hungary...Truffle Hound’s achievement is to demonstrate the diversity of truffle culture beyond the traditional strongholds of France and Italy." - Times Literary Supplement

"A gripping adventure story…There’s so much in here, about dogs and trees, science and romance, about smells and cooking. Rowan Jacobsen previously wrote an award-winner about oysters, and Truffle Hound should sweep the board: it is funny, fascinating and fearless." - Country Life

"Truffle Hound offers a unique insight into the secretive hunts and black-market deals that take place before chefs shave them over luxury dishes and serve them to you in restaurants. Jacobsen also meets a few good dogs along the way." - Modern Farmer

“Delightful, informative, and so much fun to read, this book will inspire you to grab your four-legged friend and scramble into the forest, noses twitching, in search of your own dirt-covered delicacies.” - Fern Watt, author of ADVENTURE DOGS AND GIZELLE'S BUCKET LIST: MY LIFE WITH A VERY LARGE DOG

“Truffle Hound, like a truffle, charms by seducing us.” - Mark Kurlansky

“For centuries the truffle has been cooking’s most mysterious ingredient, from its forest-floor secret locations to its high-luxury dishes. This enlightening book opens a whole new window onto this terrific tuber.” - David McMillan, chef and co-owner, Joe Beef

“With wit and intrigue, Rowan Jacobsen casts a spell as alluring as the truffle itself, pulling readers into a foodie fever dream that moves like an Italian trifulau through the woods: brisk, clear-eyed, and full of high spirits.” - Langdon Cook, author of THE MUSHROOM HUNTERS

“A terrific addition to the oeuvre. What is special about Truffle Hound is its investigation of many truffles from many places. For all those who think of truffles in binary terms, as in T. melanosporum and T. magnatum, Truffle Hound will be a revelation.” - Eugenia Bone, author of MYCOPHILIA

“One of the most remarkable single-subject books to come along in a while . . . Jacobsen covers oysters in exhaustive detail, but with writing so engaging and sprightly that reading about the briny darlings is almost as compulsive as eating them . . . There may be no more pleasurable food than a raw oyster, there almost certainly is no better guide.” - Los Angeles Times on A GEOGRAPHY OF OYSTERS

“Written in an accessible style by a hard-core ostreaphile, A Geography of Oysters is a fun read, inviting you to join Jacobsen on his quest for an oyster-rich life. Yes, please!” - Washington Post on A GEOGRAPHY OF OYSTERS

“[H]ere are the Winesap, the Pound Sweet, the Maiden’s Blush and Black Twig, rendered in a vivid prose rarely seen outside of the wine list . . . For anyone who’s willing to get swept up in the grand romance of food, this handsome volume will make for seductive reading.” - Morning Edition, NPR, on APPLES OF UNCOMMON CHARACTER