Through the Mountains: The French Broad River and Time (Hardcover) 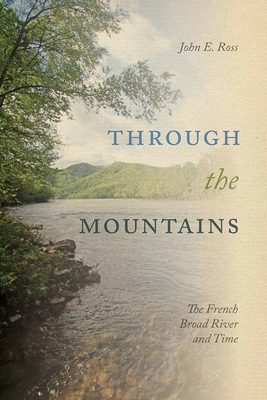 Through the Mountains: The French Broad River and Time (Hardcover)

Two generations have passed since the publication of Wilma Dykeman’s landmark environmental history, The French Broad. In Through the Mountains: The French Broad River and Time, John Ross updates that seminal book with groundbreaking new research. More than the story of a single river, Through the Mountains covers the entire watershed from its headwaters in North Carolina’s Blue Ridge and the Great Smoky Mountains to its mouth in Knoxville, Tennessee.

The French Broad watershed has faced new perils and seen new discoveries since 1955, when The French Broad was published. Geologists have learned that the Great Smoky Mountains are not among the world’s oldest as previously thought; climatologists and archaeologists have traced the dramatic effects of global warming and cooling on the flora, fauna, and human habitation in the watershed; and historians have deepened our understanding of enslaved peoples once thought not to be a part of the watershed’s history. Even further, this book documents how the French Broad and its tributaries were abused by industrialists, and how citizens fought to mitigate the pollution.

Through the Mountains also takes readers to notable historic places: the hidden mound just inside the gate of Biltmore where Native Americans celebrated the solstices; the once-secret radio telescope site above Rosman where NASA eavesdropped on Russian satellites; and the tiny hamlet of Gatlinburg where Phi Beta Phi opened its school for mountain women in 1912.

Wilma Dykeman once asked what the river had meant to the people who lived along it. In the close of Through the Mountains, Ross reframes that question: For 14,000 years the French Broad and its tributaries have nurtured human habitation. What must we start doing now to ensure it will continue to nourish future generations? Answering this question requires a knowledge of the French Broad’s history, an understanding of its contemporary importance, and a concern for the watershed’s sustainable future. Through the Mountains fulfills these three criteria, and, in many ways, presents the larger story of America’s freshwater habitats through the incredible history of the French Broad.

JOHN ROSS, winner of the National Outdoor Book Award, is the author of more than a dozen books exploring the interaction of humans with the natural world, including Rivers of Restoration and, most recently, The Forecast for D-day and the Weatherman behind Ike’s Greatest Gamble.
“John Ross has given us a valued lens to the meandering lifespan of one of our storied rivers, embraced by the ancient Appalachian Mountains. It is a welcome contemporary companion to Wilma Dykeman’s iconic The French Broad in weaving the interconnectivity of land, water, and unfolding human habitation. In a larger sense, Through the Mountains is a universal chronicle of the abiding promise and peril of our nation’s vast network of rivers.”
—Dr. Doug Orr, coauthor, Wayfaring Strangers: The Musical Voyage from Scotland and Ulster to Appalachia, coeditor, The North Carolina Atlas: Portrait for a New Century

“Through the Mountains gives us fresh perspectives on the natural and cultural history of the French Broad River watershed in western North Carolina and eastern Tennessee. As John Ross leads us through centuries of human habitation in the watershed, a clear theme emerges: the ongoing tension between economic development and environmental preservation, and the need for humankind to discover—or reclaim—sustainable ways of living within our natural world.”
—Jim Stokely, son of Wilma Dykeman, author of The French Broad, published as part of the Rivers of America Series by Rinehart in 1955 and subsequently by the University of Tennessee Press

“John Ross has produced a fascinating and well-documented book incorporating current trends and research with a view to the past and the future of the French Broad watershed. Along with Wilma Dykeman’s 1955 book on the French Broad, Through the Mountains . . . is a must read for those of us who live in and love this region.”
—Jefferson Chapman, Director Emeritus, McClung Museum of Natural History and Culture