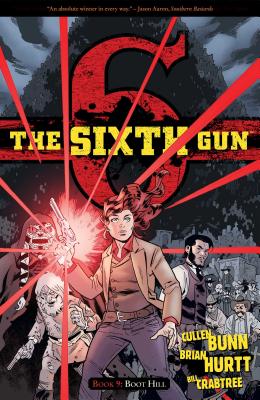 This is book number 9 in the The Sixth Gun series.

The gates of the Armageddon have been thrown open, and the world we know has been destroyed. Now, Griselda and her minions journey through the Realm of the Dead in search of the Devil's Workshop. Giving chase, Drake Sinclair and Becky Montcrief have one chance to stop the Grey Witch before she takes control of the Workshop and recreates the world in her horrific image. Old friends—and old enemies—reappear in this final apocalyptic chapter of the hit series!
Cullen Bunn is the writer of comic books such The Sixth Gun, Shadow Roads, The Damned, Helheim, and The Tooth for Oni Press. He has also written titles including Harrow County (Dark Horse), Uncanny X-Men, and Deadpool Kills the Marvel Universe (Marvel).