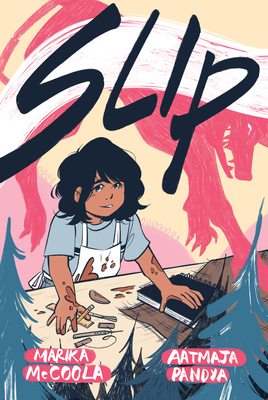 “Teens will connect with this story about a teenage artist’s attempts to navigate her work and friendships after her best friend attempts suicide. Great for a teen book club — there’s much to analyze and discuss in this short graphic novel.”
— Amanda Grell, Pearl's Books, Fayetteville, AR

From Eisner-Award nominated writer Marika McCoola and debut artist Aatmaja Pandya, an emotional coming-of-age graphic novel for fans of Bloom and Laura Dean Keeps Breaking Up with Me.

Right before Jade is about to leave for a summer art intensive, her best friend, Phoebe, attempts suicide. How is Jade supposed to focus on herself right now?

But at the Art Farm, Jade has artistic opportunities she’s been waiting for her whole life. And as she gets to know her classmates, she begins to fall for whimsical, upbeat, comfortable-in-her-own-skin Mary. Jade pours herself into making ceramic monsters that vent her stress and insecurities, but when she puts her creatures in the kiln, something unreal happens: they come to life. And they’re taking a stand: if Jade won’t confront her problems, her problems are going to confront her, including the scariest of them all—if Jade grows, prospers, and even falls in love this summer, is she leaving Phoebe behind?

Marika McCoola is a writer, illustrator, educator,  and the New York Times  bestselling author of Baba Yaga's Assistant. She has spent over a decade working to connect books with readers. She studied illustration, art history, creative writing, and ceramics at the Maryland Institute College of Art in Baltimore and received her BFA in illustration in 2009.

Aatmaja Pandya is a cartoonist and illustrator born and raised in New York. She graduated from the School of Visual Arts in 2014 and has been illustrating professionally ever since. Slip is her first graphic novel.
“A fierce, transformative graphic novel about art and relationships.”
—Kirkus Reviews

“This graphic novel successfully brings the story to life via symbolism and figurative language coupled with deeply developed characters…With themes ranging from mental health to self-discovery, this ­art-infused text will entice graphic novel fans and art students and leave them wanting another installment of Jade’s ­story.”
—School Library Journal