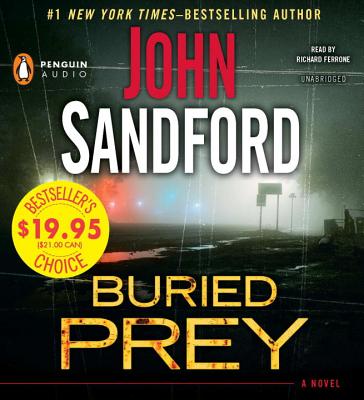 This is book number 21 in the A Prey Novel series.

"One of the best," said Kirkus Reviews of Storm Prey. "Razor-sharp dialogue, a tautly controlled pace and enough homicides for a miniseries. What more could fans want?"

A house demolition provides an unpleasant surprise for Minneapolis-the bodies of two girls, wrapped in plastic. It looks like they've been there a long time. Lucas Davenport knows exactly how long.

In 1985, Davenport was a young cop with a reputation for recklessness, and the girls' disappearance was a big deal. His bosses ultimately declared the case closed, but he never agreed with that. Now that he has a chance to investigate it all over again, one thing is becoming increasingly clear: It wasn't just the bodies that were buried. It was the truth.
John Sandford is the author of twenty-four Prey novels; the Virgil Flowers novels, most recently Storm Front; and six other books. He lives in New Mexico.
Praise for John Sandford’s Prey Novels

“Sandford is a writer in control of his craft.”—Chicago Sun-Times

“Enough pulse-pounding, page-turning excitement to keep you up way past bedtime.”—Minneapolis Star Tribune

“One of the most engaging characters in contemporary fiction.”—Detroit News

“Just right for fans of The Silence of the Lambs.”—Booklist

“One of the most horrible villains this side of Hannibal.”—Richmond Times-Dispatch