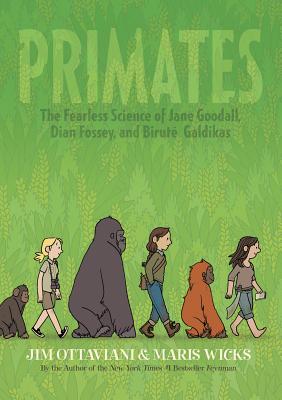 Jim Ottaviani returns with an action-packed account of the three greatest primatologists of the last century: Jane Goodall, Dian Fossey, and Biruté Galdikas. These three ground-breaking researchers were all students of the great Louis Leakey, and each made profound contributions to primatology—and to our own understanding of ourselves.
Tackling Goodall, Fossey, and Galdikas in turn, and covering the highlights of their respective careers, Primates is an accessible, entertaining, and informative look at the field of primatology and at the lives of three of the most remarkable women scientists of the twentieth century. Thanks to the charming and inviting illustrations by Maris Wicks, this is a nonfiction graphic novel with broad appeal.

Jim Ottaviani has written fifteen (and counting) graphic novels about scientists. His books include Naturalist (with E.O. Wilson), Astronauts: Women on the Final Frontier, Hawking, The Imitation Game, a biography of Alan Turing, Primates, about Jane Goodall, Dian Fossey, and Biruté Galdikas; and Feynman, about the Nobel-prize winning physicist, artist, and raconteur. His books are New York Times bestsellers, have been translated into a dozen languages, and have received praise from publications ranging from Nature and Physics World to Entertainment Weekly and Variety.

Jim lives in Michigan and comes to comics via careers in nuclear engineering and librarianship.

Maris Wicks lives in sunny Somerville, Massachusetts. She is the author behind Human Body Theater, as well as the illustrator of New York Times Bestselling Primates, with Jim Ottaviani. Wicks has also created comics for Spongebob Comics, DC and Marvel. When Maris is not drawing comics, she can be found prepping slides for her collection of vintage microscopes.

“An accessible introduction to Goodall's, Fossey's and Galdikas' lives and work.” —Kirkus Reviews

“Presented as dedicated, iconoclastic, and profoundly in awe of the creatures around them, Goodall, Fossey, and Galdikas are inspiring figures, and Ottaviani does a first-rate job of dangling enough tantalizing tidbits to pique readers' interest in the topic.” —Booklist

“The story of how each of these women loved primates and lived among them to study their behavior is compelling, and might inspire a whole new generation of scientists to follow in their footsteps.” —School Library Journal

“This is an inviting introduction that will undoubtedly lure many readers into further investigation of this groundbreaking fieldwork.” —BCCB

“Splendid.” —The Miami Herald on Feynman

“Entertaining and informative.” —Science on Feynman

“Captures the jazzy flow of Feynman's life in its spare lines.” —USA Today on Feynman

“These images capture with remarkable sensitivity the essence of Feynman's character. The comic-book picture somehow comes to life and speaks with the voice of the real Feynman.” —Freeman Dyson, The New York Review of Books on Feynman