The Reason for God: Belief in an Age of Skepticism (Paperback) 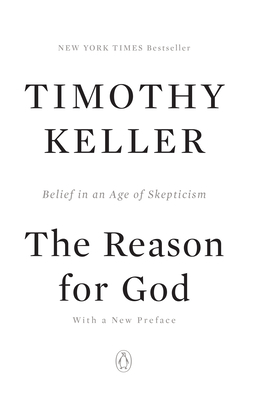 The Reason for God: Belief in an Age of Skepticism (Paperback)


Not Currently On Our Shelves. Usually Ships in 1-5 Days.
A New York Times bestseller people can believe in—by "a pioneer of the new urban Christians" (Christianity Today) and the "C.S. Lewis for the 21st century" (Newsweek).

Timothy Keller, the founding pastor of Redeemer Presbyterian Church in New York City, addresses the frequent doubts that skeptics, and even ardent believers, have about religion. Using literature, philosophy, real-life conversations, and potent reasoning, Keller explains how the belief in a Christian God is, in fact, a sound and rational one. To true believers he offers a solid platform on which to stand their ground against the backlash to religion created by the Age of Skepticism. And to skeptics, atheists, and agnostics, he provides a challenging argument for pursuing the reason for God.


Timothy Keller was born and raised in Pennsylvania and educated at Bucknell University, Gordon-Conwell Theological Seminary, and Westminster Theological Seminary. His first pastorate was in Hopewell, Virginia. In 1989 he started Redeemer Presbyterian Church in New York City with his wife, Kathy, and their three sons. Today, Redeemer has nearly six thousand regular Sunday attendees and has helped to start more than three hundred new churches around the world. He is the author of The Songs of Jesus, Prayer, Encounters with Jesus, Walking with God Through Pain and Suffering, Every Good Endeavor, and The Meaning of Marriage, among others, including the perennial bestsellers The Reason for God and The Prodigal God.

"It is easy to understand [Timothy Keller's] appeal."
-The New York Times

"In a flood of bestsellers by skeptics and atheists...Keller stands out as an effective counterpoint and defender of the faith. The Reason for God makes a tight, accessible case for reasoned religious belief."
-The Washington Post

"It's a provocative premise, in pursuit of which Keller...takes on nonbelievers from evolutionary biologists to the recent rash of atheist authors."
-The Boston Globe

"Reverend Tim Keller [is] a Manhattan institution, one of those open urban secrets, like your favorite dim sum place, with a following so ardent and so fast-growing that he has never thought to advertise."
-New York magazine

"I thank God for him."
-Billy Graham