Hidden: Animals in the Anthropocene (Hardcover) 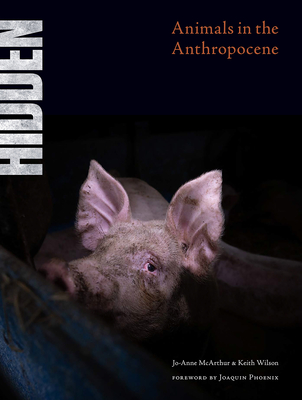 Hidden: Animals in the Anthropocene (Hardcover)


Not Currently On Our Shelves. Usually Ships in 1-5 Days.
This book is published by We Animals Media and distributed by Lantern Publishing & Media.

A collection of stunning images from some of the world’s leading photographers of animals in the human environment.

HIDDEN: Animals in the Anthropocene is an unflinching book of photography about our conflict with non-human animals around the globe. Through the lenses of thirty award-winning photojournalists, HIDDEN shines a light on the invisible animals in our lives: those with whom we have a close relationship and yet fail to see. The animals we eat and wear; the animals we use for research, work, and for entertainment; the animals we sacrifice in the name of tradition and religion. HIDDEN is a historical document, a memorial, and an indictment of what is and should never again be.

“The photojournalists featured in Hidden have entered some of the darkest, most unsettling places in the world. The images they have captured are a searing reminder of our unpardonable behavior towards animals and will serve as beacons of change for years to come.”—Joaquin Phoenix, actor

“I am, quite simply, in awe of these photographers. In a way, they are like war photographers, except witness to a war that so many people choose to suppress that exists. This takes enormous inner strength and bloody-minded determination, because they cannot save any of the animals that they photograph; they can only hope that their photos will help illuminate the mass extermination that unfolds every second of every day across the planet. To me, they are heroes. Not just for one day, but over and over and over again.”—Nick Brandt, photographer

Jo-Anne McArthur is an award-winning photojournalist, sought-after speaker, and the founder of We Animals Media. She has been documenting the plight of animals on all seven continents for almost two decades. She is the author of two books, We Animals (2014) and Captive (2017), and was the subject of Canadian filmmaker Liz Marshall’s acclaimed documentary The Ghosts in Our Machine. Jo-Anne is based in Toronto, Canada and travels many months each year to document and share the stories of animals worldwide.

Keith Wilson is the co-founder (with Britta Jaschinski) of PHOTOGRAPHERS AGAINST WILDLIFE CRIME™, an international group of award-winning photographers who have joined forces to use their powerful and iconic images to help bring an end to the illegal wildlife trade. Their efforts culminated in the publication of Photographers Against Wildlife Crime (2018). Keith also edits fine art nature photography books, working with some of Europe’s leading landscape and wildlife photographers. Titles include: Zero Footprint (Leeming+Paterson), Silver (Jonathan Chritchley), and As Long As There Are Animals (David Lloyd). He is also the editor of the bestselling Remembering Elephants and its successor Remembering Rhinos, both published for the Born Free Foundation.