Empty Hands, A Memoir: One Woman's Journey to Save Children Orphaned by AIDS in South Africa (Sacred Activism #12) (Paperback) 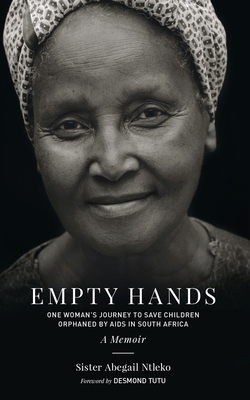 Empty Hands, A Memoir: One Woman's Journey to Save Children Orphaned by AIDS in South Africa (Sacred Activism #12) (Paperback)


This book is currently on backorder. Please call or email for availability.
Empty Hands is the inspiring memoir of Zulu nurse and healthcare activist Sister Abegail Ntleko. Growing up poor in a rural village with a father who didn't believe in educating girls, against seemingly insurmountable odds Sister Abegail earned her nursing degree and began work as a community nurse and educator, dedicating her life to those in need. "Her story tells us," says Desmond Tutu, who wrote the foreword to the book, "what a single person can accomplish when heart and mind work together in the service of others."

Overcoming poverty and racism within the apartheid South African system, she adopted her first child at a time when it was unheard of to do so. And then she did it again and again. In forty years she has taken in and cared for hundreds of children who had nothing, saving babies—many of them orphans whose parents died of AIDS—from hospitals that were ready to give up on them and let them die.

Empty Hands describes the harshness of Ntleko's circumstances with wit and wisdom in direct, beautifully understated prose and will appeal not only to activists and aid workers, but to anyone who believes in the power of the human spirit to rise above suffering and find peace, joy, and purpose.

"Ntleko's story, which she tells in simple language, is inspiring and moving. She neither dwells in nor dramatizes the hardships she has faced, preferring instead to focus on 'fill[ing] her hands with love and then spend[ing] all that love until [her] hands are empty again.' A brief, genuine, heartfelt memoir of an awe-inspiring life."—Kirkus Reviews
Born into extreme poverty in KwaZulu-Natal, Sister Abegail Ntleko overcame tremendous obstacles to obtain an education and become a nurse, eventually becoming one of South Africa's preeminent community activists. She received an Unsung Heroes of Compassion award presented by the Dalai Lama in 2009. Now 79 years old, Sister Abe has built and managed two orphanages serving hundreds of young people and has helped thousands of children and families affected by HIV. She has also personally adopted and fostered more than 30 children, and her latest project, the Kulungile Care Centre in Underberg, has become home for her large family.
"A tenaciously hopeful memoir by a South African nurse who mothered hundreds of children orphaned by AIDS, all in the spirit of ubuntu—the Zulu belief that you are only a person because of other people." —O, the Oprah Magazine

"A South African nurse’s memoir of how she escaped grinding poverty to become a beloved advocate for and caretaker of homeless children. Ntleko grew up the youngest of 12 children in Harding, a tiny village in the KwaZulu-Natal region of South Africa. When her mother died, relatives took in her youngest siblings while her older sisters married or found work. At age 6, she found herself alone to care for herself and her alcoholic father. Working as a laundress and, later, a field hand, and with no time to make friends her age, the author's main source of moral support came from an English missionary worker, who taught Ntleko the lesson that would become her life mantra: “if you want to be of help and service to others…get an education.” At 14, she began school, against the wishes of her tradition-bound father. Getting only a few hours of sleep each night, she worked tirelessly to make her dreams come true. She even ran away from home to earn the money her father could not give her to continue her studies. Ntleko was 28 when she graduated from high school and began her training as a nurse. Yet it was not until she adopted the first of many children a few years later that she realized her true calling was to help homeless youngsters. Ntleko tackled the challenges of single parenthood in the 1960s; more than a decade later, she found herself tackling the even greater challenge of the AIDS crisis. She eventually founded two organizations, Clouds of Hope and Kulungile, dedicated to providing shelter for children from AIDS-affected families. Ntleko’s story, which she tells in simple language, is inspiring and moving. She neither dwells on nor dramatizes the hardships she has faced, preferring instead to focus on 'fill[ing] her hands with love and then spend[ing] all that love until [her] hands are empty again.' A brief, genuine, heartfelt memoir of an awe-inspiring life."
—Kirkus Reviews

"[Ntleko's] story is one of triumph over adversity and will inspire and motivate readers."
— Anna Jedrziewski, Retailing Insight