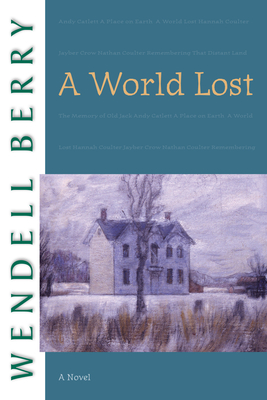 This is book number 4 in the Port William series.

In this, Wendell Berry’s fifth novel and ninth work of fiction, Andy Catlett revisits his own ninth year in the summer of 1944 when his beloved uncle is shot and killed by the surly and mysterious Carp Harmon. This is his Uncle Andrew, after whom the boy is named, someone who savored “company, talk, some kind of to–do, something to laugh at.”

Years later, still possessed by the story, Andy seeks to get to the bottom of all this, to understand the two men and their lethal connection.

“Berry deftly balances Andy’s investigation into the town’s past with an equally moving realization not only of the sustaining value of memory but of the manner in which they are shaped in enduring ways by what they love . . . a sharp portrait of a town nursing its secrets over decades.” —Kirkus Reviews
Wendell Berry is the author of fifty books of poetry, fiction, and essays. He was recently awarded the Cleanth Brooks Medal for Lifetime Achievement by the Fellowship of Southern Writers and the Louis Bromfield Society Award. For over forty years he has lived and farmed with his wife, Tanya, in Kentucky.