Stayin' Alive: The 1970s and the Last Days of the Working Class (Hardcover) 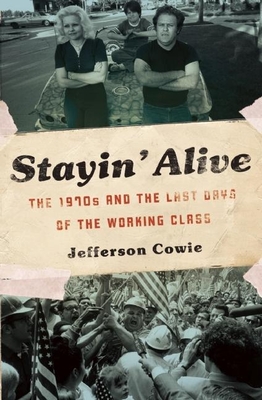 Stayin' Alive: The 1970s and the Last Days of the Working Class (Hardcover)


This book is currently on backorder. Please call or email for availability.
An epic account of how middle-class America hit the rocks in the political and economic upheavals of the 1970s, this wide-ranging cultural and political history rewrites the 1970s as the crucial, pivotal era of our time. Jefferson Cowie's edgy and incisive book--part political intrigue, part labor history, with large doses of American musical, film, and TV lore--makes new sense of the 1970s as a crucial and poorly understood transition from New Deal America (with its large, optimistic middle class) to the widening economic inequalities, poverty, and dampened expectations of the 1980s and into the present. Stayin' Alive takes us from the factory floors of Ohio, Pittsburgh, and Detroit, to the Washington of Nixon, Ford, and Carter. Cowie also connects politics to culture, showing how the big screen and the jukebox can help us understand how America turned away from the radicalism of the 1960s and toward the patriotic promise of Ronald Reagan. Cowie makes unexpected connections between the secrets of the Nixon White House and the failings of George McGovern campaign; radicalism and the blue-collar backlash; the earthy twang of Merle Haggard's country music and the falsetto highs of Saturday Night Fever. Like Jeff Perlstein's acclaimed Nixonland, Stayin' Alive moves beyond conventional understandings of the period and brilliantly plumbs it for insights into our current way of life.
Jefferson Cowie is an associate professor of history at Cornell University. He is the author of Capital Moves: RCA's Seventy-Year Quest for Cheap Labor (The New Press), which received the Philip Taft Prize for the Best Book in Labor History for 2000, and a co-editor of Beyond the Ruins: The Meanings of Deindustrialization. He lives in Ithaca, New York.

so fresh, fertile and real that the only thing it resembles is itselfYou just have to read it. It establishes its author as one our most commanding interpreters of recent American experience. It corrals all the generational energies coursing through the centrifuge of postbaby boomer 70s scholarship and churns them into the first compelling, coherent statement I’ve read of what happened in the '70sCowie's accomplishment is to convey what this epic cheat felt like from the inside.”Rick Perlstein, The Nation

If you want to understand how we got herehow the Democrats’ New Deal coalition shattered in the 1970s, and why progressives are still picking the shrapnel out of their political hidesyou must read Stayin' Alive. A fun read with cultural insightCowie is impossibly fair.”Joan Walsh, Salon.com