Season of the Bruja Vol. 1 (Paperback) 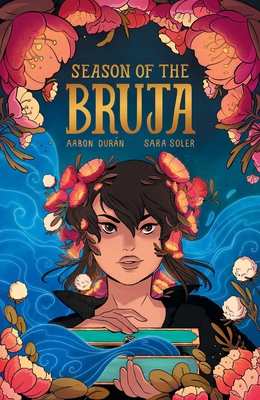 Season of the Bruja Vol. 1 (Paperback)


On Our Shelves Now
Season of the Bruja follows a young woman as she comes into her magical abilities and faces reemergent threats from the past.

From a young age, Althalia knew she would someday be the last of her kind—a bruja, tasked with keeping the power and stories of the ancient ways from fading fully into history. Never alone, Althalia works in a paranormal museum with her friends, a real-life Chupacabra and a were-coyote, while living with and caring for her beloved abuela. Through these powerful connections, her skills and knowledge grow.

But the prejudice her people have always faced continues, and after a seemingly random encounter with a priest, Althalia feels the weight of hundreds of years of religious oppression coming down upon her and her abuela. She must realize her destiny and grow into it quickly if she is to prevent the church from achieving its ultimate goal—destroying the last bruja.
Aaron has lived in Portland, OR for over 20 years, but spent his childhood in the desolate high desert of Northern California. He’s worn many hats over the years, going from film production to radio host, writing has always been his love. In addition to his young adult novels, Aaron has written stories for Dark Horse Comics, Image Comics, and Activision. When he’s not at his keyboard, he’s in the kitchen experimenting with traditional Mexican ingredients to rediscover lost dishes.

Comic-book artist and illustrator born in Spain currently living in Barcelona, where she moved to study at Escola Joso. There, she started working in comic-books and the publishing world with short stories for several fanzines, but also as costume and stage designer, and for animation studios as a storyboard and background artist for the “Memories of a Man in Pajamas” adaptation Paco Roca's graphic novel. Her professional career began 2017, with “Red & Blue” (Panini comics), and since then, with publishers such as Dark Horse Comics, Planeta comics or RBA, on titles like "Dr. Horrible Friends Forever", "Plants vs Zombies", "Primavera graphic sound", "Planeta Manga vol.2" She keeps the hard work fueled by dark coffee and with the help of her assistant Cimmeria the cat.
"There's nothing quite as cool as finding a comic you didn't know you needed in your life, and you're reminded how fun it is to discover something new."
— David F. Walker

“Season of the Bruja is a supernaturally good tale: damn entertaining, energetic and well realized, with characters that you can’t help but love.”
— Andrew Constant, writer on Nightwing: Future State and The Demon: Hell is Earth

"Aaron Durán and Sara Soler's Season of the Bruja is full of danger, fun, monsters and heart. You *will* fall in love with its characters instantly and eagerly await for each new installment. Get ready to enjoy the fiesta!"
— David Lafuente, artist of Harley Quinn, Radiante Black, Neil Gaiman's The Graveyard Book