The Wealth of Nations: Part I (Paperback) 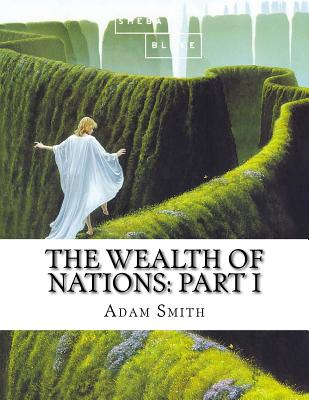 The Wealth of Nations: Part I (Paperback)

This is book number 1 in the Wealth of Nations series.

The Wealth of Nations is the magnum opus of the Scottish economist and moral philosopher Adam Smith. The book offers one of the world's first collected descriptions of what builds nations' wealth, and is today a fundamental work in classical economics. By reflecting upon the economics at the beginning of the Industrial Revolution, the book touches upon such broad topics as the division of labour, productivity, and free markets. An important theme that persists throughout the work is the idea that the economic system is automatic, and, when left with substantial freedom, able to regulate itself. This is often referred to as the "invisible hand." The ability to self-regulate and to ensure maximum efficiency, however, is limited by externalities, monopolies, tax preferences, lobbying groups, and other "privileges" extended to certain members of the economy at the expense of others. The Wealth of Nations was published 9 March 1776, during the Scottish Enlightenment and the Scottish Agricultural Revolution. It influenced a number of authors and economists, as well as governments and organizations. For example, Alexander Hamilton was influenced in part by The Wealth of Nations to write his Report on Manufactures, in which he argued against many of Smith's policies. Interestingly, Hamilton based much of this report on the ideas of Jean-Baptiste Colbert, and it was, in part, Colbert's ideas that Smith responded to with The Wealth of Nations. The Wealth of Nations was the product of seventeen years of notes, an observation of conversation among economists of the time concerning economic and societal conditions during the beginning of the Industrial Revolution, and took Smith ten years to produce. The result, An Inquiry to the Wealth of Nations, was a treatise which sought to offer a practical application for reformed economic theory to replace the mercantilist and physiocratic economic theories that were becoming less relevant in the time of industrial progress and innovation. It provided the foundation for new economists, politicians, mathematicians, biologists, and thinkers of all fields to build upon. Irrespective of historical influence, The Wealth of Nations represented a clear shift in the field of economics, comparable to Sir Isaac Newton's Principia Mathematica for physics, Antoine Lavoisier's Trait l mentaire de Chimie for chemistry, or Charles Darwin's On the Origin of Species for biology.