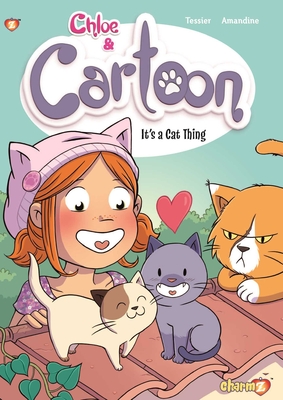 This is book number 2 in the Chloe & her cat series.

After three months in the Blin household, Cartoon the kitten is starting to find his place in the family. From catnaps with adolescent Chloe, playing with little Arthur, and sharpening his claws in a never-ending rivalry with Tony--the head of the household-- Cartoon is set. That is, until one day when he finds himself in a moving car that is pulling into a place with all sorts of strange animal noises and smells. What is going on? Will the honeymoon be over once and for all when Cartoon meets the Vet?
GREG TESSIER has been writing stories since childhood. While at school, he studied history and cultural development, and today he oversees public reading projects in France. His first comic series, CHLOE, has been very well received in France and is now being translated in English for the first time.

AMANDINE first came to the comics scene in 2006 with her work in Violet's Wings, based on a screenplay by Sarabelle. She attended the University of Paris VIII, where she studied comic arts. When she is not working on the CHLOE series, she continues to seek out new projects and visit French schools.