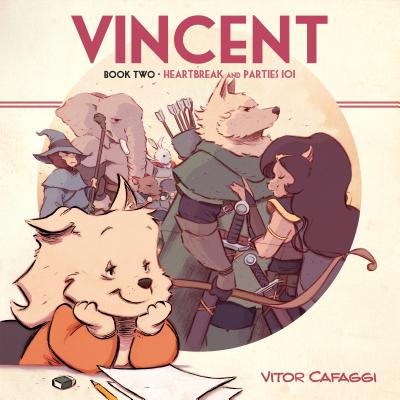 This is book number 2 in the Vincent series.

Fabio Moon (Daytripper, How to Talk to Girls at Parties) says “It is so good reading VINCENT, by Vitor Cafaggi, that when it ends it leaves you longing for more." In this hip, beautiful illustrated series, populated with an irresistible anthropomorphic cast of characters, things are really heating up for Vincent. It wasn’t too long ago that he could only dream about being in a serious relationship, and suddenly finding himself involved with not one, but two incredible females. He’s made his decision to get serious with Princess, and to just be friends with Lady. That’s fine until Princess leaves for college. If it wasn’t hard enough to maintain such a long distance relationship, Vincent’s just got a call from Princess, saying “We need to talk.” Can parties, RPG, and cheese empanadas ease Vincent’s pain as he starts college life alone and confused?
Vitor Cafaggi is a professor of visual narrative, script and character development in Minas Gerais, Brazil. His debut to the world of comics was with the webcomic Puny Parker, which narrated the childhood of his favorite hero, Spider-Man. He gained notoriety in his country with the graphic novels inspired by Brazilian super-property Turma da Mônica (Monica and Friends) and the comic strip Valente (Vincent) published by the Brazilian newspaper O Globo. Vitor has won the HQ Mix trophy multiple times for his excellence in comic art.
“VINCENT may be a dog, but we can all relate.”
— NJ.com

“Along with being a talented artist with a distinct style (all his animal characters are quite frankly adorable) [Vitor Cafaggi]’s also gifted at characterization.”
— ICV2