The Avoidable War: The Dangers of a Catastrophic Conflict between the US and Xi Jinping's China (Hardcover) 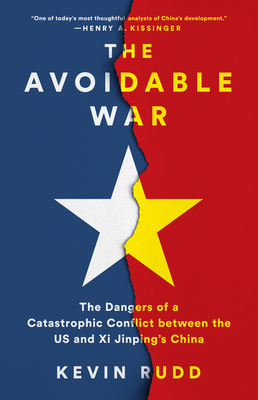 The Avoidable War: The Dangers of a Catastrophic Conflict between the US and Xi Jinping's China (Hardcover)

A war between China and the US would be catastrophic, deadly, and destructive. Unfortunately, it is no longer unthinkable.

The relationship between the US and China, the world’s two superpowers, is peculiarly volatile. It rests on a seismic fault—of cultural misunderstanding, historical grievance, and ideological incompatibility. No other nations are so quick to offend and be offended. Their militaries play a dangerous game of chicken, corporations steal intellectual property, intelligence satellites peer, and AI technicians plot. The capacity for either country to cross a fatal line grows daily.

Kevin Rudd, a former Australian prime minister who has studied, lived in, and worked with China for more than forty years, is one of the very few people who can offer real insight into the mindsets of the leadership whose judgment will determine if a war will be fought. The Avoidable War demystifies the actions of both sides, explaining and translating them for the benefit of the other. Geopolitical disaster is still avoidable, but only if these two giants can find a way to coexist without betraying their core interests through what Rudd calls “managed strategic competition.” Should they fail, down that path lies the possibility of a war that could rewrite the future of both countries, and the world.

Kevin Rudd is president and CEO of Asia Society and has been president of the Asia Society Policy Institute since January 2015. He served as Australia's 26th Prime Minister from 2007 to 2010, then as Foreign Minister from 2010 to 2012, before returning as Prime Minister in 2013. Rudd graduated from the Australian National University with honors in Chinese studies, and is fluent in Mandarin. He also studied at the National Taiwan Normal University in Taipei.
“[P]enetrating and sensible… [a] worthy and ambitious intellectual re-creation."—Kevin Peraino, New York Times

“Rudd’s book provides a rich and realistic portrayal of China’s motivations, as well as a stark warning to a world standing on the edge of a conflict potentially far more devastating than Russia’s recent invasion of Ukraine.”—Financial Times

“Rudd directly confronts the growing possibility of war and offers well-thought-out proposals to prevent that catastrophic outcome and the ‘global carnage’ it would cause.”—New York Review of Books

“[O]ne of the best primers on US-China relations.”—The Telegraph

“Rudd has become one of the most influential Western commentators on relations between China and the West. He correctly takes the prospect of a war between the US and China very seriously and comes up with a plan to avert disaster.”—Gideon Rachman, Financial Times, best summer books of 2022

“[A] probing analysis of the risks of war between China and the United States.”—Irish Times

“Rudd, the former prime minister of Australia, debuts with an incisive analysis of the rising tensions between the U.S. and China. Surveying the cultural, historical, and ideological roots of the conflict, Rudd makes a convincing case that the two sides now regard ‘some form of armed conflict or confrontation’ as inevitable…. Shot through with reasoned analysis and evenhanded appraisals of both countries’ strengths and weaknesses, this is a valuable guide to de-escalating a global flashpoint.”—Publishers Weekly

“An exploration of one of the world’s most significant and fraught international relationships… An accessible primer on the evolving China–U.S. rivalry.”—Kirkus

“A lifelong student of China, Kevin Rudd has become one of today’s most thoughtful analysts of China’s development. The Avoidable War focuses on the signal challenge posed by China’s evolution to America and to world order. Can the US and China avoid sleepwalking into a conflict? Rudd offers constructive steps for the two powers to stabilize their relations.”—Henry A. Kissinger

“Wise counsel from a seasoned statesman who recognizes the real risk of catastrophic war and illuminates a promising path the US and China could take to avoid it.”—Graham Allison, Douglas Dillon Professor of Government at the Harvard Kennedy School, and author of Destined for War: Can America and China Escape Thucydides’s Trap?

“An extraordinary tour de force that analyzes the most important geopolitical relationship of the twenty-first-century. Organized, like Dante’s Inferno, into concentric circles that describe in brilliant detail the challenges ahead and a timely prescription to avoid a catastrophe. Let us truly hope that we can indeed avoid a war that looms upon us like a dark tower, threatening all the progress we have made.”—Admiral James Stavridis, 16th supreme Allied Commander of NATO, former dean of the Fletcher School of Law and Diplomacy at Tufts University

“Based on a lifetime of observation and experience of China and America, Kevin Rudd has produced a rare book of wisdom and a detailed roadmap for how the two countries can manage their strategic competition and avoid a disastrous war.”—Joseph S. Nye, Harvard University Distinguished Service Professor, Emeritus

“This is an important book and Mr Rudd, now president of the US-based Asia Society, makes his case powerfully.”—The National (UAE)

“Kevin Rudd has written the year’s best China book…With thoroughness and precision, Rudd has assembled a wide array of information and historical background… it is one of the best single-volume surveys of the China issue available to the public.” —Claremont Review of Books