The Circles in the Sky (Hardcover) 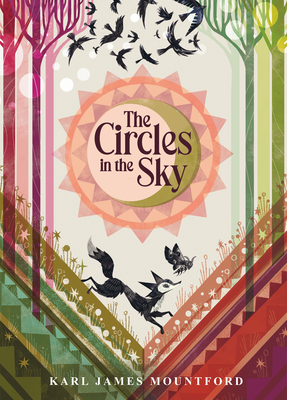 The Circles in the Sky (Hardcover)


On Our Shelves Now
With luminous illustrations, this original folktale about the discovery of a lifeless bird offers a sympathetic exploration of grief, loss, and hope.

One morning, Fox is drawn toward the forest. There, in a clearing, he sees something small and silent, perhaps forgotten. It’s a bird, lying as still as can be. Fox is confused, upset, and angry. Is the bird broken? Why doesn’t it move or sing, no matter what Fox does? His curious antics are spied by a little moth, who shares a comforting thought about the circles in the sky—that the sun, even after it sets, is reflected by the moon and the stars, reminding us of its light. In an author-illustrator debut, Karl James Mountford pairs a text at once lyrical and humorous, meditative and down-to-earth with glorious, multilayered artwork that will take your breath away. Told with sensitivity and an enchanting visual style, this story of the ineffable nature of death and life has the feel of a universal folktale for modern times.
Karl James Mountford is an illustrator who works in both traditional and digital media. He illustrated the picture books Maurice the Unbeastly by Amy Dixon and The Curious Case of the Missing Mammoth by Ellie Hattie as well as book covers and chapter illustrations for adult titles. He lives and works in Wales, where his sketchbooks rarely get a day off.
Mountford does dual duty in giving voice to both the confusion that comes with death and a template on how to be there for those in pain. . . . Speaking to heart and eye in equal measures, a beautiful treatise on remembering life and helping those left behind.
—Kirkus Reviews (starred review)

The stylized illustrations capture this exploration of the tangible and intangible with a graceful beauty, balancing movement and energy against a background of stillness. . . . Visual details emphasize the dance between life and death. . . Mountford lets those visuals speak for themselves, allowing his readers to feel the weight of Fox’s emotions and subtly placing Bird’s death in the context of all living things. . . .Taken as a whole, this is a poignant, aspirational model of reckoning with death’s immediate permanence as well as its unknowability.
—The Bulletin of the Center for Children's Books (starred review)

Reminiscent of a folktale, this picture book provides a profound exploration of death in nature. . . . Mountford’s digital illustrations are geometric, replete with colorful concentric circles and parallel lines in patterns that seem to symbolize order and harmony in the natural world. Students will appreciate this title's gentle wisdom and comfort and may even find it useful for their own healing process of grief.
—School Library Connection