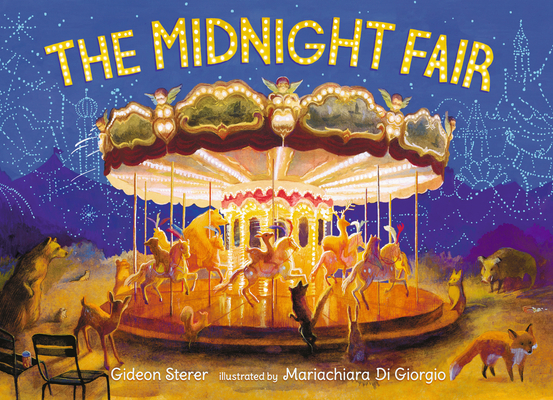 
Not Currently On Our Shelves. Usually Ships in 1-5 Days.
As darkness falls on the fairgrounds, the animals venture out of the woods for one magical, memorable night! An exhilarating wordless picture book.

Far from the city, but not quite the countryside, lies a fairground. When night comes and the fair is empty, something unexpected happens. Wild animals emerge from the forest, a brave raccoon pulls a lever, and the roller coasters and rides explode back into bright, neon life. It’s time for the woodland creatures to head to the fair! In a gorgeous wordless picture book, author Gideon Sterer and illustrator Mariachiara Di Giorgio offer an exuberant take on what animals are up to when humans are asleep. Suffused with color and light, the panel illustrations celebrate the inherent humor and joy in deer flying by on chair-swings, a bear winning a stuffed bear, three weasels carrying a soft pretzel, and a badger driving a bumper car. With thrills both spectacular and subtle, Midnight Fair will have readers punching their tickets again and again to revel in this fantastic nocturnal world.
Gideon Sterer is the author of many books for children, including the New York Times best-selling The Christmas Owl, cowritten by Ellen Kalish and illustrated by Ramona Kaulitzki. He grew up in the woods of upstate New York, where his parents owned a small zoo. After hours he would often run around and let the animals out of their cages. Who knows what sort of midnight mischief they got into? Gideon Sterer lives in Brooklyn.

Mariachiara Di Giorgio is an illustrator, storyboard artist, and concept designer. She created her first picture book, the wordless Professional Crocodile, with writer Giovanna Zoboli. Her work has been exhibited at the Bologna Children's Book Fair and with the New York Society of Illustrators. Mariachiara Di Giorgio lives in Rome, Italy.
In Mariachiara Di Giorgio’s beautiful and atmospheric paintings, wild creatures watch a grassy fairground from a safe distance as carnies set up tents, rides and food stands. . .Wordless and eloquent, “The Midnight Fair” offers true enchantment for children ages 3 to 8.
—The Wall Street Journal

Captivating spreads by Di Giorgio (Professional Crocodile) tell a wordless story about a night of magic for a forest’s animal denizens. . .Watching a whole forest full of creatures encounter the fair delivers a sheaf of unexpected delights—especially when they take pleasure in all the same things their human counterparts do.
—Publishers Weekly (starred review)

What happens after the midway closes and rides shut down for the night? A lively after-hours adventure. . .Di Giorgio interprets Sterer’s wordless tale in a rich, soft palette, with dramatic full openings and multiple detailed frames conveying the excitement, the lights, the smells of popcorn and fairground foods, the sounds of rides and riders. . .Gorgeously whimsical and utterly convincing.
—Kirkus Reviews (starred review)

When the traveling carnival arrives and sets up near the wood, curious animals rejoice. . .The vibrancy of the watercolor, colored pencils, and gouache illustrations sing in full-color pages and panels and multiple perspectives. This splendid story needs no words: gorgeous landscapes celebrate nature’s beauty, while luminous renderings of the carnival depict magical moments. Children will savor this glorious, wordless night to remember.
—Booklist (starred review)

Forest creatures emerge from the shadows to have their own nighttime fun at the county fairgrounds in this wordless and wondrous picture book. . .Cinematic visuals include moments of humor as creatures are shown stuffing their faces with snacks, playing games, and covering their eyes on rides. The glowing watercolor, gouache, and colored-pencil illustrations are atmospheric and brilliantly rendered through lush washes of color and intriguing contrasts of dark and light, illuminating the setting and depicting an engaging tension between the wildness of the animals and the humanness of their behaviors and activities as fairgoers.
—The Horn Book (starred review)

Gideon Sterer and and Mariachiara Di Giorgio’s The Midnight Fair may be a wordless picture book, but its story is clear, compelling and utterly enchanting. . .Through clever use of framing and perspective, Sterer and Di Giorgio invite readers to be a part of each moment...Every inch of illustrator Di Giorgio’s art is captivating, from a scene in which the silhouetted creatures’ eyes glow in the dusk as they emerge from the woods to a poignant moment by the lake near the story’s end. But when the carnival lights come on, her illustrations become truly spellbinding. Gleaming and golden, The Midnight Fair radiates magic. It’s truly exceptional.
—BookPage (starred review)

Ask 100 children what might happen if you put wild animals in charge of a country fair in the middle of the night—there's a good chance that variations of their answers appear in this gloriously imaginative wordless picture book by Gideon Sterer (From Ed's to Ned's) and Mariachiara Di Giorgio (Professional Crocodile). . .Lush watercolor, gouache and colored pencil artwork by Di Giorgio is spectacular not just in its liveliness and beauty but in its remarkable depth and perspective. . .Surprise after surprise emerges for the keen-eyed reader, and not a detail is neglected, including what happens to the goldfish prize at the end of the night. The Midnight Fair—like a ride on a Ferris wheel—will likely elicit entreaties of "Again, again!"
—Shelf Awareness (starred review)