Wounds: Six Stories from the Border of Hell (Paperback) 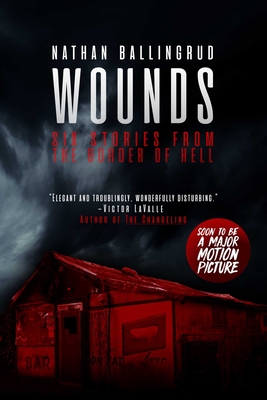 Wounds: Six Stories from the Border of Hell (Paperback)


On Our Shelves Now
“Stretch[es] the boundaries of the genre...It’s horrifying, but there’s beauty.” —The New York Times
“One of the field’s most accomplished short story writers.” —The Washington Post

A gripping collection of six stories of terror—including the novella “The Visible Filth,” the basis for the upcoming major motion picture—by Shirley Jackson Award–winning author Nathan Ballingrud, hailed as a major new voice by Jeff VanderMeer, Paul Tremblay, and Carmen Maria Machado—“one of the most heavyweight horror authors out there” (The Verge).

In his first collection, North American Lake Monsters, Nathan Ballingrud carved out a distinctly singular place in American fiction with his “piercing and merciless” (Toronto Globe and Mail) portrayals of the monsters that haunt our lives—both real and imagined: “What Nathan Ballingrud does in North American Lake Monsters is to reinvigorate the horror tradition” (Los Angeles Review of Books).

Now, in Wounds, Ballingrud follows up with an even more confounding, strange, and utterly entrancing collection of six stories, including one new novella. From the eerie dread descending upon a New Orleans dive bartender after a cell phone is left behind in a rollicking bar fight in “The Visible Filth” to the search for the map of hell in “The Butcher’s Table,” Ballingrud’s beautifully crafted stories are riveting in their quietly terrifying depictions of the murky line between the known and the unknown.
Nathan Ballingrud was born in Massachusetts in 1970, but spent most of his life in the South. Ballingrud is the author of the collections North American Lake Monsters and Wounds: Six stories from the Border of Hell. He’s been awarded two Shirley Jackson Awards, and have shortlisted for the World Fantasy, British Fantasy, and Bram Stoker Awards. Among other things, he has been a cook on oil rigs and barges, a waiter, and a bartender in New Orleans. He now lives in North Carolina.
“Nathan Ballingrud is one of my favorite contemporary authors and any time he’s got a new book out I run to the front of the line. His work is elegant and troublingly, wonderfully disturbing.”
— -- Victor LaValle, award-winning author of THE CHANGELING

“Nathan Ballingrud's brilliant fiction brims with imagination, integrity (I do not use that term lightly), and an authentic world-weary dread that bores directly into your heart. With Wounds you'll gladly follow Nathan to Hell and (maybe) back."
— -- Paul Tremblay, award-winning author of THE CABIN AT THE END OF THE WORLD and A HEAD FULL OF GHOSTS

STARRED REVIEW "[Ballingrud's] evocative and strangely beautiful descriptions of the grotesque and terrible are sure to linger long after they are read."
— -- Publishers Weekly

"Ballingrud has secured his place as a formidable voice and talent. A wonderfully disturbing delight."
— Winnipeg Free Press

“Stretch[es] the boundaries of the genre by employing these grand, horrific worlds. “The Butcher’s Table” reminds me of the first time I read Clive Barker’s “In the Hills, the Cities.” It’s horrifying, but there’s beauty."—The New York Times

"In only two slender collections, Nathan Ballingrud has emerged as one of the field’s most accomplished short story writers.”—The Washington Post