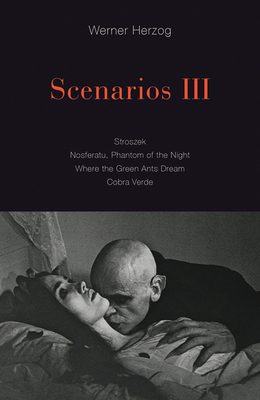 For the first time in English, and in his signature prose poetry, the film scripts of four of Werner Herzog’s early works

“Herzog doesn’t write traditional scripts,” Film International remarked of the master filmmaker’s Scenarios I and II. “Instead, he writes scenarios which are like a hybrid of film, fiction, and prose poetry.”

Continuing a series that Publishers Weekly pronounced “compulsively readable . . . equal parts challenging and satisfying, infuriating and enlightening,” Scenarios III presents, for the first time in English, the shape-shifting scripts for four of Werner Herzog’s early films: Stroszek; Nosferatu, Phantom of the Night; Where the Green Ants Dream; and Cobra Verde. We can observe Herzog’s working vision as each of these scenarios unfolds in a form often dramatically different from the film’s final version—as, in his own words, Herzog works himself up into “this kind of frenzy of high-caliber language and concepts and beauty.”

With Scenarios I and II, this volume completes the picture of Herzog’s earliest work, affording a view of the filmmaker mastering his craft, well on his way to becoming one of the most original, and most celebrated, artists in his field.

Werner Herzog has produced, written, and directed more than seventy films, including Nosferatu the Vampyre; Aguirre, the Wrath of God; Fitzcarraldo; and Grizzly Man. He grew up in a remote mountain village in Bavaria and now lives in Los Angeles, California. His books Of Walking in Ice and Scenarios I and II are also published by Minnesota.