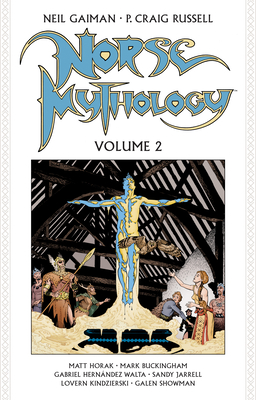 
In this second volume, Gaiman and Russell once more team with a legendary collection of artists to bring more Norse myths to life, including the origins of poetry and a mead that many will die for, Thor and Loki’s eventful trip into the land of giants, the gods’ woeful bargain that might lose them eternal life, and the beloved god Frey’s journey to Valhalla and beyond to find a certain missing something.

Neil Gaiman is the celebrated author of books, graphic novels, short stories, and films for readers of all ages. Some of his most notable titles include the groundbreaking #1 New York Times bestselling Sandman comics series (which garnered nine Eisner Awards and the World Fantasy Award for Best Short Story); The Graveyard Book (the first book ever to win both the Newbery and Carnegie medals); American Gods (which will soon be released as a television show in the US); and The Ocean at the End of the Lane, the UK's National Book Award 2013 Book of the Year. The film adaptation of How to Talk to Girls at Parties (directed by John Cameron Mitchell) will be in theaters in 2018.