The Ethics of Ambiguity (Paperback) 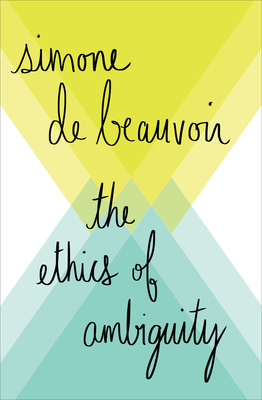 The Ethics of Ambiguity (Paperback)


Not Currently On Our Shelves. Usually Ships in 1-5 Days.
From the groundbreaking author of The Second Sex comes a radical argument for ethical responsibility and freedom. In this classic introduction to existentialist thought, French philosopher Simone de Beauvoir's The Ethics of Ambiguity simultaneously pays homage to and grapples with her French contemporaries, philosophers Jean-Paul Sartre and Maurice Merleau-Ponty, by arguing that the freedoms in existentialism carry with them certain ethical responsibilities. De Beauvoir outlines a series of "ways of being" (the adventurer, the passionate person, the lover, the artist, and the intellectual), each of which overcomes the former's deficiencies, and therefore can live up to the responsibilities of freedom. Ultimately, de Beauvoir argues that in order to achieve true freedom, one must battle against the choices and activities of those who suppress it. The Ethics of Ambiguity is the book that launched Simone de Beauvoir's feminist and existential philosophy. It remains a concise yet thorough examination of existence and what it means to be human.

Simone de Beauvoir (1908-1986) was a French existentialist philosopher, intellectual, and social theorist best known for her writings on existentialist ethics and feminist existentialism, as well as for her infamous polyamorous relationship with fellow French existentialist Jean-Paul Sartre. World-renowned for her metaphysical novels She Came to Stay and The Mandarins, de Beauvoir also wrote a number of essays on philosophy, politics, and social issues. Her diverse writings go on to include biographies, as well as her four-volume autobiography, made up of Memoirs of a Dutiful Daughter, The Prime of Life, Force of Circumstance, and All Said and Done. In addition to her philosophical writing, de Beauvoir was an ardent feminist, her most famous philosophical work being The Second Sex, which is consistently referenced in the study of feminism.