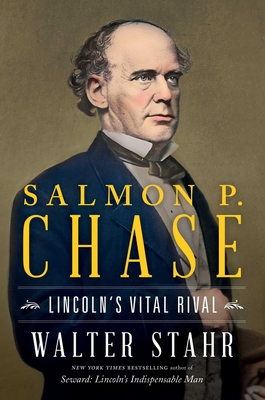 From an acclaimed New York Times bestselling biographer, an “eloquently written, impeccably researched, and intensely moving” (The Wall Street Journal) reassessment of Abraham Lincoln’s indispensable Secretary of the Treasury: a leading proponent for black rights during his years in cabinet and later as Chief Justice of the United States.

Salmon P. Chase is best remembered as a rival of Lincoln’s for the Republican nomination in 1860—but there would not have been a national Republican Party, and Lincoln could not have won the presidency, were it not for the groundwork Chase laid over the previous two decades. Starting in the early 1840s, long before Lincoln was speaking out against slavery, Chase was forming and leading antislavery parties. He represented fugitive slaves so often in his law practice that he was known as the attorney general for runaway negroes.

Tapped by Lincoln to become Secretary of the Treasury, Chase would soon prove vital to the Civil War effort, raising the billions of dollars that allowed the Union to win the war while also pressing the president to recognize black rights. When Lincoln had the chance to appoint a chief justice in 1864, he chose his faithful rival because he was sure Chase would make the right decisions on the difficult racial, political, and economic issues the Supreme Court would confront during Reconstruction.

Drawing on previously overlooked sources, Walter Stahr offers a “revelatory” (The Christian Science Monitor) new look at the pivotal events of the Civil War and its aftermath, and a “superb” (James McPherson), “magisterial” (Amanda Foreman) account of a complex forgotten man at the center of the fight for racial justice in 19th century America.
Walter Stahr is the New York Times bestselling author of Seward: Lincoln’s Indispensable Man, Stanton: Lincoln’s War Secretary, and John Jay: Founding Father. A two-time winner of the Seward Award for Excellence in Civil War Biography, Stahr practiced law in Washington and Asia for more than two decades. He is an honors graduate of Stanford University and Harvard Law School.
“Eloquently written [and] impeccably researched… as powerful and moving a political biography as I have read.”
— The Wall Street Journal

“Stahr has… provided the reader with a gift.”
— Washington Independent Review of Books

“This superb book more than fills the need for a modern biography of Salmon Chase, a leader of the antislavery movement, founder of the Republican Party, advocate of racial justice, Secretary of the Treasury who transformed the American monetary structure in the process of financing the Civil War, and Chief Justice of the United States whose opinions are still cited by the Supreme Court. Chase fully deserves Walter Stahr’s encomium as ‘one of the great Americans of his generation.’”
— James McPherson, Pulitzer Prize-winning author of Battle Cry of Freedom

“Magisterial. A fascinating character study of a man who Knew He Was Right even when wrong, and yet whose financial and judicial legacies continue to this day.”
— Amanda Foreman, New York Times bestselling author of A World on Fire

“Revelatory... Walter Stahr presents readers with a far more textured and complicated Salmon P. Chase than in previous biographies, showing him as a shrewd figure who fought a long battle for a variety of progressive causes, including defending those who escaped slavery in court.”
— The Christian Science Monitor

“Long viewed as either a pretentious thorn in Lincoln’s side or the beneficiary of Lincoln’s generosity, Salmon P. Chase has long deserved a full, fresh, fair reappraisal. With this sweeping, meticulously researched, and convincingly argued biography, Walter Stahr has produced just such a study.”
— Harold Holzer, Gilder Lehrman Prize-winning author of Lincoln and the Power of the Press

“Chase has the biography he deserves.”
— Claremont Review of Books

“Well-researched... Despite countless books about Lincoln and those in his orbit, Chase is an important figure who merits this capable study.”
— Kirkus Reviews