The Fight to Save the Town: Reimagining Discarded America (Hardcover) 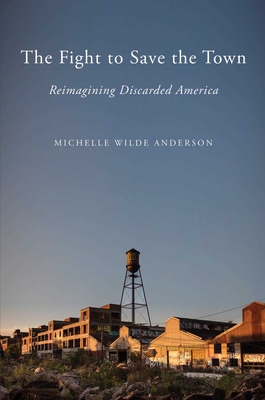 The Fight to Save the Town: Reimagining Discarded America (Hardcover)


Not Currently On Our Shelves. Usually Ships in 1-5 Days.
A sweeping and eye-opening study of wealth inequality and the dismantling of local government in four working-class US cities that passionately argues for reinvestment in people-centered leadership and offers “a welcome reminder of what government can accomplish if given the chance” (San Francisco Chronicle).

Decades of cuts to local government amidst rising concentrations of poverty have wreaked havoc on communities left behind by the modern economy. Some of these discarded places are rural. Others are big cities, small cities, or historic suburbs. Some vote blue, others red. Some are the most diverse communities in America, while others are nearly all white, all Latino, or all Black. All are routinely trashed by outsiders for their poverty and their politics. Mostly, their governments are just broke. Forty years after the anti-tax revolution began protecting wealthy taxpayers and their cities, our high-poverty cities and counties have run out of services to cut, properties to sell, bills to defer, and risky loans to take.

In this “astute and powerful vision for improving America” (Publishers Weekly), urban law expert and author Michelle Wilde Anderson offers unsparing, humanistic portraits of the hardships left behind in four such places. But this book is not a eulogy or a lament. Instead, Anderson travels to four blue-collar communities that are poor, broke, and progressing. Networks of leaders and residents in these places are facing down some of the hardest challenges in American poverty today. In Stockton, California, locals are finding ways, beyond the police department, to reduce gun violence and treat the trauma it leaves behind. In Josephine County, Oregon, community leaders have enacted new taxes to support basic services in a rural area with fiercely anti-government politics. In Lawrence, Massachusetts, leaders are figuring out how to improve job security and wages in an era of backbreaking poverty for the working class. And a social movement in Detroit, Michigan, is pioneering ways to stabilize low-income housing after a wave of foreclosures and housing loss.

“The Fight to Save the Town changed my understanding of America. This insightful, narrative-driven book tells the story of four cities and towns with deep poverty and gutted public services. But in focusing on Americans who have committed heart and soul to their communities, Anderson weaves an ultimately hopeful story and delivers a blueprint for reform. This book pierced me and left me inspired.” —Matthew Desmond, author of Evicted

“Anderson’s book is powerful in portraying both what seems fated about hard-pressed communities and regions, and what remains within a community’s control.” —James Fallows, coauthor of Our Towns

“When a region suffers job loss and poverty is a way of life, local government becomes an overlooked make-or-break player. Does it lay off needed workers, impose fines and get itself hated? Or does it draw on its people’s extraordinary leadership and find a far better way? Through vivid up-close portraits, Anderson gives us unsung heroes in four remarkable, turn-around communities—whom she calls ‘good teachers’ for the rest of America. Such an important read.” —Arlie Hochschild, author of Strangers in Their Own Land

“A welcome reminder of what government can accomplish if given the chance.” —San Francisco Chronicle

“A hard-hitting yet hopeful look at how impoverished communities in the U.S. are fighting for their survival. . . . Anderson contextualizes her detailed demographic and economic data with vivid portraits of local families and activists. The result is an astute and powerful vision for improving America.” —Publishers Weekly

“Compelling . . . An ambitious, empathetic work documenting community-building versus political intransigence and racial strife . . . The Fight to Save the Town offers a corrective to bigoted narratives portraying cities as toxic boondoggles, showing how postindustrial decline blurred many complex factors. . . . It’s a welcome study of life in late-capitalist America.” —Kirkus Reviews

“Regional inequality in the US has been overlooked for too long, and in The Fight to Save the Town, Michelle Wilde Anderson zeroes in on one of its most urgent aspects: the struggles of local government in the working-class towns and cities that are most defined by impoverishment. With empathy, analytical acuity and highly readable prose, Anderson tells the story of the places that have wrongly been left for dead—wrongly because they remain home to millions of Americans, including countless people like those she profiles here who are laboring day after day to improve their cities’ lot. Anderson helps us understand why the obstacles facing these cities are so enormous, but also shows us why we should have hope.” —Alec MacGillis, author of Fulfillment: Winning and Losing in One-Click America

“The Fight to Save the Town is a gift to scholars and policymakers working in, or at the intersection of, local government law, community economic development, and urban policy. Anderson captures so much of the history, lived experience, and humanity of places like Detroit, Lawrence, and Stockton while bringing to bear, with remarkable clarity, the trenchant insights regarding municipal governance and finance gleaned from her scholarly research over the years. By lifting up the people in these places that are so essential to reimagining a different future she leaves us with hope that these cities can thrive again.” —Sheila R. Foster, Professor of Law and Public Policy, Georgetown University

“Anderson masterfully teaches us about local government’s role in the reproduction of place-based inequality by taking us into the blind spots of concentrated poverty: the municipalities too poor to provide the most basic public services needed to support stable lives. This heart-wrenching, impeccably researched, and beautifully told story is a must-read for policymakers, local electeds, academics, community advocates, and a public yearning for information about how to fulfill American promise in the places many of us forgot. It is a profound work about hardship, resiliency, and the hope for renewal.” —David Dante Troutt, author of The Price of Paradise: The Costs of Inequality and a Vision for a More Equitable America

“Michelle Wilde Anderson has the incisive mind of a scholar and the brimming heart of an activist. In luminous words that sometimes flare with the precision of a laser and sometimes glow like a votive candle, she cuts away thick scars of indifference and misapprehension to illuminate the resilience of community members in places that might be 'dying' but where millions of us still live. If you read only one book this year to better know America, let it be The Fight to Save the Town.” —Ian Haney López, Chief Justice Earl Warren Professor of Public Law at UC Berkeley School of Law, author of Merge Left: Fusing Race and Class, Winning Elections, and Saving America

“The Fight to Save the Town is a multi-faceted portrait of American poverty. The stories in it come together to explain how we arrived at this moment of remarkable inequality and, hopefully, how we might overcome it.” —Donovan X. Ramsey, author of When Crack Was King (forthcoming)