A Calder at Heart (The Calder Brand #3) (Hardcover) 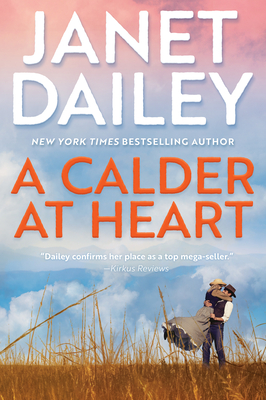 A Calder at Heart (The Calder Brand #3) (Hardcover)

This is book number 3 in the The Calder Brand series.

America’s frontier comes to vivid life in this inspiring saga of love, hope and endurance in 1919 Montana, as the end of the Great War, the looming start of Prohibition, and reignited rivalries put the town of Blue Moon on the brink of a seismic shift. Perfect for fans of Yellowstone and Dr. Quinn, Medicine Woman, Janet Dailey blends a Romeo & Juliet romance with all the intense drama, historical detail, and grand sweep of her original New York Times bestselling Calder series.

Battle-scarred and emotionally ravaged by the loss of his wife and children to Spanish flu, former US Army Major Logan Hunter heads to Blue Moon to salvage whatever peace he can near the only family he has left. Not only does the Calder clan embrace him, but patriarch Webb Calder helps Logan secure a prime piece of ranching property. Yet settling into his new home is fraught with challenges, especially since Logan’s land borders the rival Dollarhide spread, stoking the battle between the families anew and pitting Logan against an adversary who stirs him like no other . . .

From her first encounter with Logan Hunter, Dr. Kristin Dollarhide feels an instant connection to the sorrow in his beautiful eyes. As a former military MD, Kristin is no stranger to the devastating effects the war has left on hearts and minds—including her own. Despite her instinct to steer clear, Kristin is powerfully drawn to the handsome widower. Until the raging conflict takes a tragic turn, threatening all hope for their future . . .

“Dailey keeps the pace brisk with dangers both natural and man-made, and her battle-scarred protagonists are easy to root for.” – Publishers Weekly
Janet Dailey, known as “America’s First Lady of Romance,” published her first book in 1976 and went on to became one of the top selling female authors in the world, with 325 million copies of her books sold in nineteen languages in ninety eight countries. She is known for her strong, decisive characters, her extraordinary ability to recreate a time and a place, and her unerring courage to confront important, controversial issues in her stories. To learn more about Janet Dailey and her novels, please visitJanetDailey.com or find her on Facebook at Facebook.com/JanetDaileyAuthor.
Praise for A Calder at Heart

“In Dailey’s intense third Calder Brand romance, love ignites between a WWI veteran and a frontier town doctor…Dailey keeps the pace brisk with dangers both natural and man-made, and her battle-scarred protagonists are easy to root for. Series fans will be well pleased.” —Publishers Weekly

Praise for the Novels of Janet Dailey

“Dailey highlights the brutal reality of survival in the American West while building a sprawling, emotional love story for Joe and Sarah. Both fans and newcomers to Dailey’s novels will be pleased.” —Publishers Weekly on Calder Brand

“Janet Dailey is always a great and wonderful read and will have you wanting to get to know the entire Calder family.” —Fresh Fiction on Calder Brand

"Twists and surprises will keep the pages of this warm-hearted romance turning." —Publishers Weekly on Texas Forever

"Readers have been waiting more than a year for the next installment in author Janet Dailey's New Americana series, and it has finally arrived. Letters from Peaceful Lane gives readers a deeply personal view of life in the Ozark Mountains." —Woman's World

"Dailey gives readers a steadily paced novel showcasing the harsh realities that many second marriages undergo. The detailed character development shines...adding nuance to the contemporary romances. Fans of Susan Wiggs and Debbie Macomber will enjoy the third in Dailey's New Americana series, which emphasizes that family struggles can be overcome, and love will always prevail." —Booklist on Letters from Peaceful Lane

"As captivating as it is swoon-worthy." —First for Women on Hart's Hollow Farm