Living in Color: What's Funny About Me: Stories from In Living Color, Pop Culture, and the Stand-Up Comedy Scene of the 80s & 90s (Hardcover) 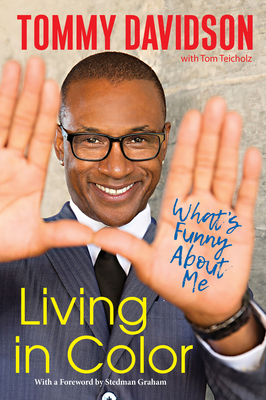 Living in Color: What's Funny About Me: Stories from In Living Color, Pop Culture, and the Stand-Up Comedy Scene of the 80s & 90s (Hardcover)


This book is currently on backorder. Please call or email for availability.
In 1990, Tommy Davidson burst onto the scene in the Emmy Award-winning show In Living Color, a pioneering sketch comedy show, featuring a multi-racial cast of actors and dancers who spoke to an underrepresented new generation created by Hip Hop Nation.

A story of black excellence, in this revealing memoir, Tommy shares his unique perspective on making it in Hollywood, being an integral part of television history, on fame and family, and on living a life that has never been black and white—just funny and true . . .

Abandoned as an infant on the streets of Greenville, Mississippi, and rescued by a loving white family, Tommy Davidson spent most of his childhood unaware that he was different from his brother and sister. All that changed as he came of age in a society of racial barriers—ones that he was soon to help break. On a fledgling network, Tommy joined the cast of In Living Color, alongside other relative newcomers including Jim Carrey, Rosie Perez, Jamie Foxx and Jennifer Lopez—all united by an ingenious throng of Wayans siblings (Keenen, Damon, Kim, Shawn, and Marlon), poised to break new ground.

Now Tommy gives readers the never-before-told behind-the-scenes story of the first show born of the Hip Hop Nation: from its incredible rise, to his own creation of such unforgettable characters as Sweet Tooth Jones and dead-on impressions of Sammy Davis, Jr., Michael Jackson, M.C. Hammer and Sugar Ray Leonard, and appearing in such classic sketches as “Homie The Clown,” the “Hey Mon, family,” and the unforgettable “Ugly Woman,” through guest-star skirmishes (and black eyes) to backstage tensions and the eventual fall of this pop-culture touchstone. He reveals his own nascent career on the stand-up circuit with Adam Sandler, Jerry Seinfeld, Louie Anderson and performing with Eddie Murphy and Richard Pryor, as well as reflections on working with Spike Lee, Halle Berry, Sam Jackson, Chris Rock and Jada Pinkett Smith. And he also shares his very personal story of living with—and being inspired and empowered by—two distinct family histories.

Told with humor and hard-won honesty by a singular voice whose family and friendships help him navigate a life of personal and professional highs and lows, Living in Color is a bracing, illuminating, and remarkable success story.

An homage to the groundbreaking series In Living Color was featured in Bruno Mars’s music video for his hit song Finesse, a remixed collaboration with Cardi B. It was a loving tribute that exemplified the sustained cultural impact of the show, and now 90s kids can dig into their nostalgia through this humorous memoir of one of its stars!
Tommy Davidson’s three decades of success as a performer in TV, film, and as one of the most popular standup comedians and cable comedy special performers, has earned him a huge and devoted worldwide following. From being discovered at the Apollo Theater’s amateur night to starring in the original cast of In Living Color and appearing in films including Ace Ventura: When Nature Calls with Jim Carrey, and Spike Lee’s Bamboozled, he is also known to a generation raised on the animated characters he has voiced, such as Oscar Proud of the Disney animated series The Proud Family. Today, he performs all over the country doing sold out solo shows as well as being a frequent guest on national and local morning TV and radio programs, and has performed numerous times for the troops all over the world including in Afghanistan and Iraq.

Tom Teicholz is an award-winning journalist, contributor to Forbes.com, and cohost of The Buried Lede podcast.