The Fast Ride: Spectacular Bid and the Undoing of a Sure Thing (Hardcover) 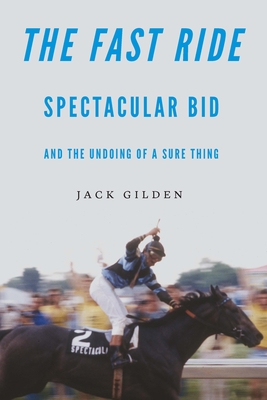 The Fast Ride: Spectacular Bid and the Undoing of a Sure Thing (Hardcover)


Not Currently On Our Shelves. Usually Ships in 1-5 Days.
In an era of spectacular thoroughbreds, Spectacular Bid was perhaps the most exalted racehorse of them all. In 1979 he won the Kentucky Derby and the Preakness Stakes—and transcended his sport on a run of twelve consecutive stakes victories—but his quest for the Triple Crown was lost with a third-place finish in the Belmont Stakes due to a series of bizarre events that have never been accurately reported.

In The Fast Ride, Jack Gilden tells the story of what really happened that day the Bid lost the biggest race of his life. Along the way, he introduces the reader to a cast of characters from the gilded age of late twentieth-century horse racing, from Bid’s owners, the renowned Meyerhoff family, to Grover “Buddy” Delp, the fast-talking trainer, to teenage jockey Ronnie Franklin, whose meteoric rise to fame aboard Spectacular Bid came at the cost of his innocence and well-being. Also present are four of the era’s magnificent Latino riders, Ángel Cordero Jr., Jacinto Vasquez, Georgie Velasquez, and Ruben Hernandez, who all felt the sting of rejection and bigotry during their long careers even as they found their way and raised the level of competition to a feverish pitch.

Underlying Spectacular Bid’s saga was a thin line between hard work and excess, including substance abuse, animal manipulation and doping, and race fixing. Hardly anyone in the horse’s circle made it out unscathed or undamaged.

The Fast Ride is the story of a great racehorse, unfulfilled dreams, the exhilaration and steep price of striving at all costs, and an American era in which getting everything you ever wanted could be the most empty and unfulfilling sensation of all.


Jack Gilden is a past winner of the Simon Rockower journalism award. He is the author of Collision of Wills: Johnny Unitas, Don Shula, and the Rise of the Modern NFL (Nebraska, 2018). He also consults for businesses about their messaging and teaches journalism and composition at the college level.

"These racing stories include serious political controversies, big-money real-estate deals, a quasi-criminal veterinarian smuggled to the track in the trunk of a car, lots of drugs, a fair amount of sex, and some very angry jockeys."—Max Watman, Wall Street Journal

"Although many have voiced their opinions on Spectacular Bid's loss, few have looked as closely at the explosive story, with its underlying threads of class and race, as Gilden, who turned to sources close to the subjects in order to get a clear picture."—Olive Fellows, Christian Science Monitor

"Gilden takes the reader inside the stables and development of a jockey and a race horse in a manner that shows both the beauty and the ugliness of this sport. This is a book anyone interested in horse racing, especially during that era, must add to their bookshelf."—Lance Smith, Guy Who Reviews Sports Books

"Not only is the ride a fast one, it’s a thrilling one."—Abby Loden, Itawamba County Times

"Every sports fan needs this book on their shelf to enjoy and to hear the results of this day in racing and how the future is altered for all involved."—Tom Knuppel, Knup Sports

"It's a complicated legacy, but Gilden, in a great read, has uncovered it in all its gruesome glory in his book."—Thom Loverro, Washington Times

"The Fast Ride is not a typical biography of a horse. . . . What it is is a riveting book about how a horse with a fairly modest pedigree and price tag, ridden by a young inexperienced jockey not equipped emotionally for such a big stage and trained by a brash Maryland hardboot, can go on to become one the all-time greats despite the shortcomings and self-destructive actions of those around him."—Steve Haskin, secretariat.com

"For those who value the sport and its past, for those who want to understand why as much as how, this is a book worth picking up. The gift of history is not simply stirring stories, but the recounting of the past so that we may understand the present, and, hopefully, plot out a future that has learned from who and what came before."—foxesofbelair.com

“Jack Gilden’s superb reporting turns the story of a great American racehorse into a riveting lesson about the difference between perception and reality. Spectacular Bid and his wild cast of human connections positively pulsate with energy.”—John Eisenberg, author of The League: How Five Rivals Created the NFL and Launched a Sports Empire