The Boy and Girl Who Broke the World (Paperback) 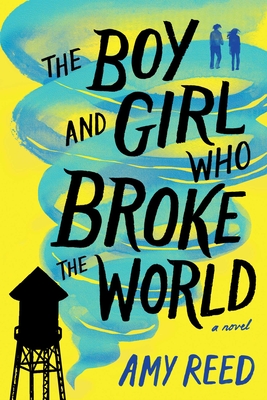 The Boy and Girl Who Broke the World (Paperback)


This book is currently on backorder. Please call or email for availability.
“Gritty, gutsy, and ferociously strange.” —Nova Ren Suma, #1 New York Times bestselling author of The Walls Around Us

The Astonishing Color of After meets Eleanor & Park in this breathtaking and beautifully surreal story about a friendship between two teens that just might shake the earth around them.

Billy Sloat and Lydia Lemon don’t have much in common, unless you count growing up on the same (wrong) side of the tracks, the lack of a mother, and a persistent loneliness that has inspired creative coping mechanisms.

When the lives of these two loners are thrust together, Lydia’s cynicism is met with Billy’s sincere optimism, and both begin to question their own outlook on life. On top of that, weird happenings including an impossible tornado and an all-consuming fog are cropping up around them—maybe even because of them. And as the two grow closer and confront bigger truths about their pasts, they must also deal with such inconveniences as a narcissistic rock star, a war between unicorns and dragons, and eventually, of course, the apocalypse.

With a unique mix of raw emotion, humor, and heart, the surreal plotline pulls readers through an epic exploration of how caring for others makes us vulnerable—and how utterly pointless life would be if we didn’t.
Amy Reed is the author of the contemporary young adult novels Beautiful, Clean, Crazy, Over You, Damaged, Invincible, Unforgivable, The Nowhere Girls, and The Boy and Girl Who Broke the World. She is also the editor of Our Stories, Our Voices. She is a feminist, mother, and quadruple Virgo who enjoys running, making lists, and wandering around the mountains of western North Carolina where she lives. You can find her online at AmyReedFiction.com.
"The Boy and Girl Who Broke the World is gritty, gutsy, and ferociously strange. Amy Reed offers us a surreal yet oddly familiar world teetering on the edge of destruction and offers hopeful and inventive ways to survive the pain and salvage our dreams. This story is powerful and unique, and I envied its wild and irreverent vision to pieces."
— Nova Ren Suma, #1 New York Times bestselling author of The Walls Around Us

* Gr 9 Up–Reed introduces readers to the “grand” state of Washington—home to the Rome Unicorns and Carthage Dragons, and Billy Sloat and Lydia Lemon. Billy lives his life as an optimist, or as optimistic as you can get with no mother, a cranky grandmother, and a drug-addicted missing uncle. Lydia, on the other hand, sees life as an endless cycle of misery and gloom. When the two towns’ schools must survive under the same roof, Billy’s and Lydia’s worlds collide. At first, Lydia is wary of Billy, as she is with all the people she meets, but as time goes on, she realizes that some of Billy’s optimism might just be rubbing off on her. And Billy realizes that maybe he can have a decent friend and someone he can count on. The unlikely duo forge a beautiful and strong relationship that changes them both. This is a fascinating story that’s incredibly hard to put down. Reed does a fantastic job of connecting readers to her characters with quick chapters that alternate between Billy’s and Lydia’s viewpoints, and the tale is so captivating that teens easily feel the emotions Billy and Lydia struggle with throughout the entirety of the novel. VERDICT Fans of Rainbow Rowell and John Green who also like a bit of fantasy will fall in love with Billy and Lydia. A great purchase for all contemporary young adult collections.–Caitlin Wilson, Meadowdale Library, North Chesterfield, VA
— School Library Journal STARRED REVIEW

This ambitious novel’s core of true friendship and emotional honesty keeps its surreal plot from feeling cluttered or confusing. Reed explores loneliness and how difficult it can be to let oneself be loved in the wake of grief, trauma, or abuse—which is why teens will deeply relate to these characters.
— Booklist