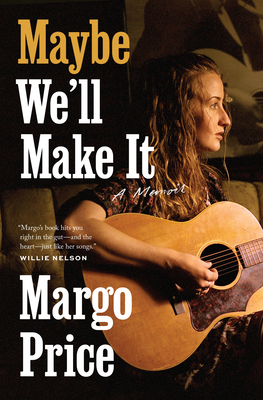 “Margo Price’s memoir serves up what it takes to make it in country music. All the heartbreak, sacrifice, bad choices, late nights, triumphs, and travails that have made her one of the hardest working women in country music today are here.”
— Keaton Patterson, Brazos Bookstore, Houston, TX

”[An] engaging and beautifully narrated quest for personal fulfillment and musical recognition...This is a fast-paced tale in which music and love always take center stage...A truly gifted musician, Price writes about her journey with refreshing candor.”—Kirkus, starred review

Country music star Margo Price shares the story of her struggle to make it in an industry that preys on its ingenues while trying to move on from devastating personal tragedies.

When Margo Price was nineteen years old, she dropped out of college and moved to Nashville to become a musician. She busked on the street, played open mics, and even threw out her TV so that she would do nothing but write songs. She met Jeremy Ivey, a fellow musician who would become her closest collaborator and her husband. But after working on their craft for more than a decade, Price and Ivey had no label, no band, and plenty of heartache.

Maybe We’ll Make It is a memoir of loss, motherhood, and the search for artistic freedom in the midst of the agony experienced by so many aspiring musicians: bad gigs and long tours, rejection and sexual harassment, too much drinking and barely enough money to live on. Price, though, refused to break, and turned her lowest moments into the classic country songs that eventually comprised the debut album that launched her career. In the authentic voice hailed by Pitchfork for tackling "Steinbeck-sized issues with no-bullshit humility," Price shares the stories that became songs, and the small acts of love and camaraderie it takes to survive in a music industry that is often unkind to women. Now a Grammy-nominated “Best New Artist,” Price tells a love story of music, collaboration, and the struggle to build a career while trying to maintain her singular voice and style.

Margo Price is a Nashville-based singer-songwriter. She has released three LPs, earned a Grammy nomination for Best New Artist, and performed on Saturday Night Live, and is the first female musician to sit on the board of Farm Aid.

[An] engaging and beautifully narrated quest for personal fulfillment and musical recognition...This is a fast-paced tale in which music and love always take center stage...A truly gifted musician, Price writes about her journey with refreshing candor.
— Kirkus, starred review

[Maybe We'll Make It] documents [Price's] prolonged plight and the unsung truth of breaking into the biz: It’s not glamorous...Her candid memoir takes the reader on a life-affirming journey.
— BuzzFeed News

Margo Price delivers an unflinching self-portrait of an artist striving to find her sound and make her Music City dreams come true...Artists of all creeds will find something relatable in Maybe We’ll Make It, with its raw depictions of the artist’s perennial dilemma: bridging the transcendental need to create with the very real need to survive. Beyond this, Price’s memoir offers a heart-wrenching account of her journey as a mother.

Price has a knack for telling stories and drawing readers into her life and experience, and Maybe We’ll Make It radiates with her bright candor; she’s not interested in hiding her heart in the shadows and covering her feelings with darkness. Price bares her soul and the jaggedness of her emotions, making Maybe We’ll Make It one of the best music memoirs so far this year.

An astonishing tale of an incredible journey...Of its many notable successes, the book efficiently and effectively seals the chapter on popular, mainstream country music's divorce from its diverse, rustic roots. Plus, Price's tales highlight that split's honest, near-destructive impact on the genre's metaphorical orphaned children. Even deeper, these artists energizing themselves and their careers via digital-era globalization and DIY bootstrapping—amid East Nashville-residing marginalization from country music's mainstream industry—reads like the most authentic and timeless outlaw tale combining elements of punk rock and country's crossover into 70s-era rock and roll.
— The Tennessean

The gritty struggle of how to get noticed in Nashville…Now established as a favourite songwriter of Willie Nelson, Margo Price had a hard ride to where she is today, her memoir reading like a soap opera borne from a song...As Price's music evolved, so her wisdom grows during the book, and at its heart is stoic love: for each other, for family and friends, and above all for music and creative freedom.
— Mojo

Courageously frank, utterly moving...Price tells us, with breathtaking honesty and courage, her story to achieve a sustainable career as a singer-songwriter. Through all manner of struggles, humiliations, disappointments, and personal tragedies, Price maintains her perseverance despite being tested to the core.
— The Current

Compelling, honest, and powerful...Maybe We’ll Make It should be required reading for anyone thinking about how music is made in the 2020’s. That applies not only to artists, but also (perhaps especially) to club owners, journalists, or record company executives.
— Americana Highways

[A] stunning, emotional, inspiring new memoir…In her authentic, no-nonsense voice, Price shares the stories that became songs, and the small acts of love and camaraderie it takes to survive in a music industry that is often unkind to women.
— Our Quad Cities

A rough, rowdy, and brutally honest story of dreams and frustrations, good and bad choices, pain and joy...Price’s willingness to be open and honest about her experiences and mistakes is one of the most fascinating aspects of the book. She also avoids the twin traps common to memoirists, neither amping up her tales for exploitative shock value nor casting her past in self-pitying justification. Instead, she presents her stories of substance abuse, bad choices, and infidelity as simple facts...While Price’s personal journey centers the book, a larger story unfolds alongside it. Price’s encounters with the 21st-century mainstream Nashville music-biz complex are informative, entertaining, and, at times, unsettling.
— The Nashvillian

[Maybe We'll Make It] begins with Price’s childhood in rural Illinois and ends with her April 2016 appearance on 'Saturday Night Live.' Most of her fans have followed the music she’s made since then, but Maybe We’ll Make It sheds light on the long road that got her there.
— Austin American-Statesman

Margo Price's memoir of grit and resilience is one of our favorites to come out on University of Texas Press's consistently quality American Music Series. The Nashville-based, Grammy-nominated singer-songwriter relates the twenty years since she dropped out of college to become a musician with a keenly illustrative narrative voice and invokes a storyteller who 'quit trying to change the past' in order to share the lessons for 'the recent future.'
— Rough Trade, "US Books of the Year 2022"

[Price’s] new memoir, which covers her childhood and her years struggling to start her career in Nashville, proves that she’s just as talented at penning prose as she is at writing songs – which is to say, really damn good. Reading this book feels like hanging out with one of your smartest, liveliest friends.
— NPR, "2022 Books We Love"

Maybe We’ll Make It is a beautiful, soul-bearing memoir…Despite her elegant prose, Price does not hold back any of the ugly details of her starving artist lifestyle…Her unabashed commentary on the sexist undertones of the country music industry, and the grueling need to prove herself to record labels that are only too eager to cast her aside, reveal her fighter spirit...Even in her darkest moments, Price writes with crushing honesty and humility. Her story serves as a poignant reflection on finding courage in chaos and leaning on a support system when life is too difficult to shoulder alone.
— SPIN, "9 Can’t-Put-Down Music Memoirs Of 2022"

[An] unflinching memoir...Price paints a vivid portrait of a musician who moves to Nashville with big dreams.
— The Boot, "10 Best Country Music Books of 2022"

Maybe We’ll Make It never becomes a morality tale, which would be out of character for the artist and a poor interpretation of her life. Price’s early years become part of the complexity of who she is, not just as an artist but as a person...It might be unusual for an artist to pen a memoir so early in her career, but Price has never done things the normal way, and in this case, the choice to write was an excellent decision.
— Spectrum Culture

[Maybe We'll Make It leaves] you hankering for a sequel this sharply remembered, keenly written and marvelously self-perceptive.
— Variety, "Best Music Books of 2022"

Price is a forthright and spirited raconteur with a quick turn of phrase. Her affable, earnest nature draws in the reader, despite her occasional transgressions (and, at times, maybe even because of them).
— Relix

This is the best music memoir of the year. As she does in her music, Price lays her soul bare here, pulling no punches in revealing her highs and lows, including her struggles with addiction and the faltering early days of her marriage, with bright candor. Price knows well how tell a story and draws us easily into the shadows and light of her life and music.
— No Depression, "2022's Most Memorable Music Books"