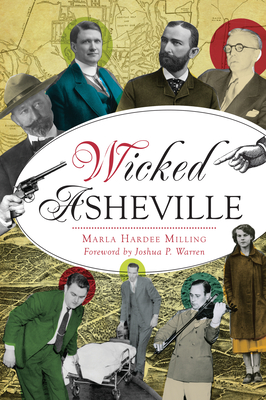 Discover the wicked and sordid history of Asheville, North Carolina in this volume by author and Asheville native Marla Hardee Milling.

Asheville is a wonderfully strange city, but it has a few shadows in its past. Teenager Helen Clevenger was brutally murdered at the luxurious Battery Park Hotel in 1936. William Dudley Pelley called himself America's Hitler and founded his Silver Legion in Asheville. He stirred up enough anti war propaganda to go to prison. A desperado named Will Harris came into town on a cold night in November 1906 and left a trail of dead bodies and panic among Asheville citizens. Mayor Gallatin Roberts killed himself in the wake of collapsing banks. Asheville native Marla Hardee Milling delves into wicked stories of murder, sedition, corruption, arson and disease.