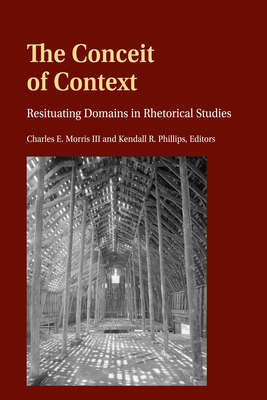 This is book number 46 in the Frontiers in Political Communication series.

This edited volume features essays derived from presentations delivered at the 15th Biennial Public Address Conference held at Syracuse University in October 2016, as well as additional material. The Conceit of Context explores the often invoked--indeed a central term in the history of rhetorical studies--but less often engaged concept of context. In this volume, we center the notion of context as the site of engagement, critique, and imagination, seeking to deepen the critical and political promise of context in the study of public discourse.

Charles E. Morris III (PhD, Pennsylvania State University) is a professor in the Department of Communication and Rhetorical Studies at Syracuse University. Professor Morris is co-founding editor of QED: A Journal of GLBTQ Worldmaking. His books include Queering Public Address, Remembering the AIDS Quilt, and An Archive of Hope: Harvey Milk's Speeches and Writings. His essays have appeared in such journals as Quarterly Journal of Speech, Communication & Critical/Cultural Studies, and Rhetoric & Public Affairs. Kendall R. Phillips (PhD, Pennsylvania State University) is founding co-director of the Lender Center for Social Justice at Syracuse University where he also serves as Professor of Communication and Rhetorical Studies. He is former president of the Rhetoric Society of America and holds visiting appointments at Massey University (NZ) and York St. John University (UK). His books include A Place of Darkness: The Rhetoric of Horror in Early American Cinema, Framing Public Memory, and Projected Fears: Horror Films and American Culture. His essays have appeared in such journals as Philosophy & Rhetoric, Quarterly Journal of Speech, and Critical Studies in Media Communication.